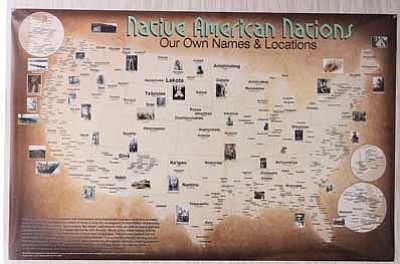 A map by cartographer Aaron Carapella showing the locations and names of tribes across North America circa 1490 is available in a variety of sizes. David Yankus/NHO

A map is defined as a representation, usually on a flat surface, of the features of an area of the earth, showing them in their respective forms, sizes and relationships.

Defining the word map may be easy, but creating one isn't necessarily as easy.

Native cartographer Aaron Carapella found this out while on a 14-year quest to create a pre-Columbian map of the continental United States circa 1490. He completed his map, "Native American Nations: Our Own Names and Locations," six months ago.

"Some tribes have already bought the map for their tribal colleges, administration offices, and museums," said Carapella. "For my next step I'm contemplating hitting the road to visit schools and tribal offices to talk about the map in person."

The Native American Nations map shows 584 North American tribes and roughly where they were located more than 500 years ago. About 150 tribes also have their current name listed below their original name on the map for those who may not know the names that the tribes call themselves. For example, you'll find Diné in large typeface across northern Arizona and western New Mexico, with Navajo printed below.

Carapella varies the size of the typeface to denote the relative land area and population of the tribes at the time. And since many tribes were nomadic, Carapella placed the name of the tribe over the area where its people originally lived before European settlers displaced them.

Carapella began working on this project when he was 19 years old after discovering a Native American atlas of all tribes was incomplete.

"When I was a teenager going to powwows, there were maps of tribes sometimes, but only maybe 50 to 100 tribes," the now 33-year-old Carapella said. "It didn't seem like it was fully researched and there was a lot of missing information."

Carapella went to work. His research began online, in libraries and with the tribes themselves. He bought four poster boards and traced the continental United States and started adding tribes on his own.

"After 14 years I wasn't too concerned necessarily about being the creator of it, I just wanted it to be made," said Carapella. "I'm trying to take the emphasis off me and just let people know that now we do have a map."

Carapella is part Cherokee from Oklahoma on his mother's side. He was raised in California but now lives in Flagstaff. His grandparents taught him about his heritage beginning at a very young age.

"My grandpa gave me my first Native book, "Custer and Crazy Horse" when I was about 6, and since then I've read hundreds of books on Native history," Carapella said. "I'm almost an amateur Native historian in a way."

Carapella, who is also a member of the American Indian Movement (AIM), said he intends to expand the map to include tribes and tribal nations from present-day Mexico, Canada, Alaska and maybe Hawaii.

Carapella spent countless hours poring through books, traveling the country and making hundreds of phone calls and emails to the tribes that still exist.

"Most tribes I could email and they'd respond rather quickly answering questions about their culture, their history and their name," said Carapella. "Sometimes I couldn't even find anyone in the tribe that knew their original name."

Certain people from some tribes even researched that part themselves, Carapella added.

"For example, the Waileptu or Cayuse people, one of the last speakers of their language worked at their museum and was able to tell me what their name meant," he said. "I couldn't find it anywhere else, either online or in any book."

Carapella said he didn't want to insult people from certain tribes because he would not be including all of their bands. He said he tried to put names of autonomous groups that might be linked culturally but not geographically and linguistically.

"For example the Lakota, Nakota, and Dakota are all Sioux. I could have put all seven bands of the Sioux here, but they see themselves as all Lakota. So for me, I felt like to put their Nation is what I was going for," said Carapella. "Another is the Cherokee, they had 89 villages or towns, but am I going to list all 89 when I most likely can't fit them all, or do I centralize the name? That was my question."

Carapella said another valuable resource was the "Handbook of the American Indians." He cross referenced that book with army records and missionary records to determine where a trader said he met with a certain tribe to narrow down locations for all tribes around 1490.

Carapella said he would then verify this data with an actual source from the tribe, to ensure the highest possibility of accuracy.

Some remaining tribes only have a dozen or fewer surviving members. Some tribes have very few speakers of their language left as well.

"I wanted to make this map to centralize all this information into one location," Carapella said. "And then also to remember all those tribes that passed away because of disease or warfare."

The 35-by-54-inch map is available in several versions, including a smaller version.

More information is available online at aaron-carapella.squarespace.com. Maps can be purchased from Carapella's website or by calling (949) 415-4981.