Court upholds reopening of uranium mine near Grand Canyon 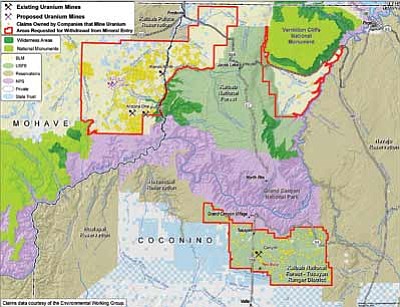 A map of the Arizona Strip shows existing and proposed uranium mines near the Grand Canyon. Graphic/Grand Canyon Trust

A three-judge panel of the 9th U.S. Circuit Court of Appeals ruled that the Bureau of Land Management did not violate environmental protection law by letting the Arizona 1 mine reopen in 2009 after a 17-year break in production.

Alan Gardner, a co-chairman of the Arizona-Utah Local Economic Coalition, said the ruling was a small step in the right direction toward bringing more mining jobs to the area and producing more energy sources locally.

"It's exactly what should be done," Gardner said. "The country needs the uranium."

But conservation groups that had challenged the decision to reopen Arizona 1 said the court's ruling sets a precedent that will let "zombie mines" operate under old regulations and ignore years of new environmental science.

"They are basically zombie mines that will live perpetually without ever being subject to new environmental reviews," said Taylor McKinnon, wildlands campaigns director with the Center for Biological Diversity.

In 2011, the Department of the Interior banned new uranium mining permits for 20 years in 1 million acres near the Grand Canyon. But older mines, like Arizona 1, were grandfathered in.

That mine had received permits and began mining at the Mohave County site in the 1980s. The mine was shuttered in 1992 when the price of uranium dropped, but Denison Mines Corp. maintained the mine "on standby" in subsequent years to make sure it complied with the original environmental permit.

In 2007, the mine renewed air and water permits and updated its bond for reclamation work, and the Bureau of Land Management gave it the go-ahead to resume mining operations.

Conservation groups and Native American tribes sued the agency to stop operations shortly after the mine reopened in 2009, claiming the mine should be subject to new environmental standards to avoid uranium contamination. But a lower court rejected that claim, saying the previous permit was still in effect, and the appeals court Monday agreed with the lower court.

The Center for Biological Diversity's McKinnon said the conservation groups and tribes involved in the lawsuit had not decided whether to appeal Monday's decision. But another plaintiff noted that the mine has already been active for four years while legal challenges dragged on.

"In essence, the damage has already been done," said Roger Clark, director for the Grand Canyon Trust, one of the groups that sued to block the mine.

McKinnon's center is also considering a lawsuit to block the re-opening of another mine on Forest Service land, scheduled to produce ore by 2015. He said that mine, the Kanab North Mine, exemplifies the damage the conservation groups fear, pointing to a U.S. Geological Survey report of high levels of uranium and arsenic in the soil hundreds of feet from the mine site and in the ponds left behind.

Preventing uranium mining completely is the goal for conservationists in the suit, because a site can never be completely reclaimed and companies often leave taxpayers to finish the job, said Sandy Bahr of the Grand Canyon Chapter of the Sierra Club.

"Having radioactive dust blowing around isn't a good thing," she said.

But others, like Gardner, are fighting the 20-year ban on uranium mining with their own lawsuits.

Gardner, a county commissioner in southern Utah, said he is involved in a lawsuit against the Bureau of Land Management because the area "desperately" needs jobs.

He said uranium mining practices are not nearly as environmentally damaging as the conservationists claim.

"There is very little surface disturbance," he said.