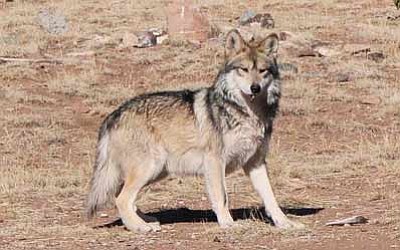 A Mexican gray wolf at the Sevilleta Wolf Management Facility in New Mexico in 2011. Photo/U.S. Fish and Wildlife Service

A male Mexican gray wolf released into the forest of eastern Arizona last month has been recaptured after failing to mate with a pack's alpha female as officials had hoped.

The wolf, designated M1133, was the first released in four years as part of an effort to restore the endangered species in Arizona and New Mexico. The U.S. Fish and Wildlife Service aimed to have it replace a pack's alpha male that was killed illegally last July.

However, the wolf wound up a bachelor wandering into New Mexico and outside the Bluestem Pack's territory in the Apache-Sitgreaves National Forests.

"It's not entirely surprising," said Sherry Barrett, the Mexican wolf recovery coordinator for the U.S. Fish and Wildlife Service. "It was worth the attempt; it just didn't work out."

For the Tucson-based Center for Biological Diversity, the bigger disappointment is the decision by wildlife officials to recapture the M1133.

"We were really hoping this wolf would be allowed to be free out there," said Michael Robinson, a conservation advocate with the group. "The right thing to do would have been to release a female into his area. He only had three weeks out there."

Barrett, saying there's a possibility the alpha female could mate with other wild wolves, defended the agency's decision.

"We're dealing with management actions on a daily basis, and this was the most appropriate action at this time," she said.

Mexican gray wolves are native to Arizona, New Mexico, Texas and Mexico. They gained protection under the Endangered Species Act in the 1970s after being hunted to the brink of extinction.

On Wednesday, an Interagency Field Team reported 75 Mexican gray wolves in the Arizona and New Mexico wilderness as of the end of 2012, an increase from 58 the year before.

M1133 was drawn from a captive breeding population of nearly 300 wolves.

Eva Sargent, director of the Southwest program for the Tucson-based conservation group Defenders of Wildlife, backed the agency's decision because the wolf wandered off without showing interest in the female. But like Robinson, Sargent sees a bigger problem: a lack of genetic diversity among the wild population.

"The crux of the issue here is that their genetics are so bad," she said. "The easiest thing they could do to fix it is release more wolves."

The last wolf released from the captive-breeding program was in 2008.

Fish and Wildlife announced that M1133 will be paired for breeding with a captive female wolf. Both will then be released in the Blue Range Wolf Recovery Area, it said.

Robinson said the plan could be successful because the service will release the pair into the wild before the pups are born. Otherwise, the pair would be subject to a 1998 U.S. Fish and Wildlife Service rule that wolves born and bred in captivity can only be released in Arizona.

That plan gives authorities the option of releasing the pair in New Mexico's Gila National Forest.

According to a U.S. Fish and Wildlife Service news release, releases of pregnant pairs have been more successful.

"It ends up anchoring the wolves to an area you want to establish as a pack because the pups aren't mobile yet," Barrett said. "We originally released (M1133) to offset the wolf that was originally shot, but now we'll have to breed in captivity."

Philip Hedrick, a conservation geneticist and professor at Arizona State University, said the genetic diversity of the wild population remains a significant problem for the Mexican gray wolf.

In a 2007 study, he found that wolves were having smaller litters in the wild and the pups weren't surviving to adulthood because of inbreeding.

"The population initially started with seven ancestral wolves," he said. "That's about as low as any endangered species, which led to this high inbreeding problem."