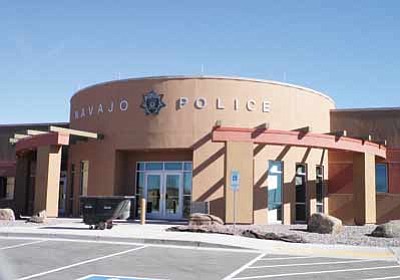 In partnership with the Navajo Nation, officials from the To'Nanees'Dizi local government will celebrate the grand opening of the new Western Navajo Diné Justice Center (WNDJC) on Feb. 15 at 10 a.m. in Tuba City.

The American Recovery and Reinvestment Act (ARRA) paid for construction of the $74 million center. Many organizations and communities as well as local, state and federal governments worked to make the center a reality. The Justice Center is currently the largest ARRA funded project on Native American land.

The WNDJC will streamline the judicial system for the tribe, county, state and federal courts. It is the first of its kind on the Navajo Nation. The Justice Center will house the Department of Corrections, the Department of Public Safety and a Judicial Department all under one roof.

Hope MacDonald Lonetree, chair of the Public Safety Committee (PSC) for the Navajo Nation Council from 2003-2010, said there has not been enough jail space on reservation lands.

"In 2003 the committee went out to the communities and had meetings with public safety personnel in each of the police districts and detention districts to find out exactly to what extent the problem was," said Lonetree, who has worked on the Tuba City Justice Center since its inception. "We found out it was much larger than we originally thought when we took office."

Soon after, Lonetree and her staff began setting priorities for what would be her first four-year term. Construction of new detention buildings was a top priority.

Later in 2003, Lonetree and the public safety committee began working with the Navajo Department of Corrections and its director, Delores Greyeyes.

"We were so thankful to have her [Greyeyes] on board because she invigorated the department and she helped to bring the priorities to light," Lonetree said. "She made sure that we were able to get accurate information as far as statistics and the status of each of the facilities."

PSC staff determined just how bad conditions were at each jail, the cost of repair, which buildings needed work first, where interim bed space might be and how to pay for it all.

Prior to construction of the new Tuba City Justice Center and Department of Corrections, because of deteriorating jails, officials moved inmates to available beds in another building or simply released them if there was no more room.

"Tuba City was probably the worst facility, and one of the oldest," said Lonetree. "In certain rooms you could see the sky, vegetation was growing through some of the walls. The analysis of the jail came back and stated that essentially the iron bars were what was holding the building together."

The Navajo Nation hired a structural engineer to work with he Environmental Health Department. They inspected the Tuba City jail every year and urged the Navajo Nation to close it down. But there was nowhere else to house the inmates, so it remained open.

"There isn't a lot of concern for the needs of Indian Country so we had some major challenges in making sure we were able to educate the funding sources so that they knew what we were facing," Lonetree said. "There were a lot of people who had misconceptions about what it is like in Indian Country. They had no concept of what it would be like to live in a community without a facility to house violent offenders. And once we get these facilities up we will be able to remedy part of the problem."

"We asked the community if they would support us raising sales tax to create a fund for new jail facilities. The people were in favor of it and adamant that the funding be used only for brick and mortar," said Lonetree. "Once we got up to about $10 million, the Navajo Nation decided to acquire a loan. So with the tax money we had built up and the loan, plus the annual revenue from that sales tax, we began and continue construction of law enforcement and court facilities in addition to the remaining public safety facilities. And that's still ongoing."

Construction of the Tuba City Justice Center began in 2010. The new detention center will have approximately 130 jail beds.

"For Ms. Greyeyes and I the internal process of the grant going through our own system was probably the biggest delay," Lonetree said. "But we're definitely very happy and ecstatic that this is going up. This has been quite an effort."

Navajo Nation President Ben Shelly is scheduled to speak at the Justice Center's grand opening. Lonetree said hopefully the Chief Justice will speak and maybe an official from the U.S. Department of Justice.

Since leaving the Navajo Nation Council's public safety committee in 2011, Lonetree is currently a contractor at the U.S. Department of Justice.

Gerald Keetso, president of the Council of Naat'aanii from the To'Nanees'Dizi local government, said in a Jan. 10 letter that the project is in its final phase.

"The long awaited vision is coming to fruition and has brought upon a celebration of great significance," Keetso said. "This collaborative achievement will enhance public safety and reinforce the need for a safer community at large."

Keetso went on to say that officials from the local government are anticipating more than 1,000 people from the community plus local media to attend the event. The Tuba City local government is putting on a luncheon and providing entertainment and security for the event.

More information about the grand opening event is available from the To'Nanees'Dizi local government at (928) 283-3284 or by email at tubacityjusticegrandopening@gmail.com.