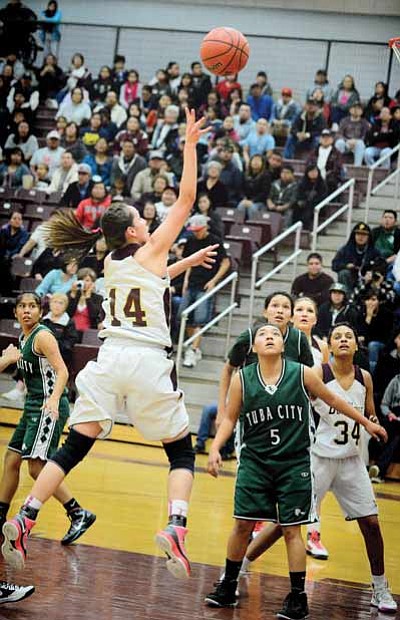 The Winslow Bulldogs defeated the Tuba City Warriors 66-50 in Winslow Jan. 31. The win in their last game of the regular season left the Bulldogs with a 16-12 record and hopes for a berth in the sectional tournament. The Bulldogs ended the season with a three-game winning streak.

The Bulldogs started strong and led 19-13 after the first quarter of play. In the second quarter, Winslow built a commanding 37-22 advantage. The margin was 55-37 after three quarters of play.

The Jan. 31 match up between the Tuba City Lady Warriors and the Winslow Lady Bulldogs came down to the wire, decided on a tip in at the buzzer. Both teams showed they deserve high seeds in post-season tournaments.

With the loss, Winslow ended the regular season with a sparkling 19-5 record. Tuba City completed the season with an excellent 21-6 record. The teams should both get high tournament seeds and should be contenders in the sectional and state tournaments.

The teams were tied 16-16 after the first quarter but Winslow led 21-19 after a low scoring second period. The Lady Bulldogs were still up 33-31 after three periods of play with back and forth play through the final period.

Tuba City got the ball trailing 49-48 with eight seconds left to play. The Lady Warriors had three shots from near the basket in the final seconds of the game. Mariah Begay tipped the ball in for two points right at the final buzzer. The referees had a quick conference, came to the scorer's table and signaled the basket good.

The Winslow Lady Bulldogs defeated the Holbrook Lady Roadrunners 60-42 in Holbrook Jan. 30. The win improved Winslow's record to 19-4 for the season.

The Lady Bulldogs sped to an 18-10 first quarter lead and were still up 26-21 at the half. The margin was 39-29 after three quarters of play and increased in the final period.

Shandiin Armao led all scorers with 15 points for the Lady Bulldogs. Mattea Begaii and Halle Hayes also scored in double figures for Winslow with 10 points each. Samantha Smith led Holbrook with 11 points and was the only Lady Roadrunner in double figures.