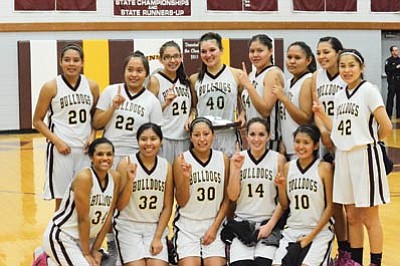 WINSLOW, Ariz. - The Winslow Lady Bulldogs won their own Winslow Winter Classic with a 57-37 victory over the Tuba City Lady Warriors in Winslow Dec. 21. They ended the 2013 portion of their season with a 7-3 record.

Winslow scored the first nine points of the championship game and led 9-2 at the end of the first quarter. They maintained that margin until the closing minutes of the game. The score was 27-16 at the half and 41-30 after three quarters.

Earlier in the tournament the Lady Bulldogs defeated the Snowflake Lady Lobos 53-28 Dec. 20 in an easy victory in the first round. The win improved Winslow's record to 5-3 and got them a match against the Monument Valley Lady Mustangs on Dec. 21. Monument Valley defeated Westwood 50-45 to advance to the semifinals.

The Lady Bulldogs built a commanding 18-2 first quarter lead against the Mustangs and were never threatened in a game that was more one-sided than the final score would indicate. The lead was 33-7 at the half and 40-18 after three quarters.

Armao was the only player in double figure for either team with 13 points for Winslow. All 13 Lady Decker led Snowflake with nine points. Only seven Lady Lobos scored.

On Dec. 21 the Lady Bulldogs put together a surprisingly easy 46-23 win over the Monument Valley Lady Mustangs in a semifinal game. Most of the fourth quarter was played with a running clock as Winslow had a lead sufficient for the running clock rule to come into effect. The win earned Winslow a berth in the championship game against the Tuba City Lady Warriors, 78-55 winners over the Window Rock Lady Scouts.

Armao led all scorers with 14 points for Winslow. Hayes was also in double figures for the Lady Bulldogs with 12 points. Ohivah Shirley led Monument Valley with 13 points but only three Lady Mustangs scored.

In losers' bracket games on Dec. 21, Joseph City beat Cholla 57-42 and Chinle beat Hopi with no score available on that game. Snowflake beat Westwood and Chinle later won the consolation championship over Snowflake but scores were not available from those games. Westwood beat Hopi 46-35.