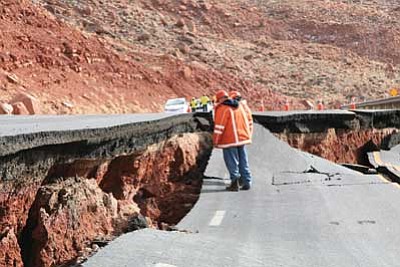 Arizona Department of Transportation employees survey damage to U.S. 89 south of Page. The damage occurred Feb. 20. More than 500 feet of pavement is damaged likely because of a geologic slump. Photo/ADOT

Robert Samour, Arizona Department of Transportation (ADOT) senior deputy state engineer of operations, said in a press release issued shortly after the disaster that the agency initially thought there was 500 feet of damaged pavement. After taking a look from an airplane, he said the damaged area was larger.

"The area over the guardrail drops off a couple hundred feet; we saw some cracking in the soil down the slope, so I would say that this is probably a 500- to 700-foot section that we're going to have to take a good look at for settlement," he said.

ADOT worked with the Arizona Division of Emergency Management and the Arizona Governor's Office on an emergency declaration that allowed ADOT to receive federal reimbursement for highway reconstruction. ADOT paid for a geotechnical investigation for engineers to look for a permanent fix to the roadway.

"We're going to work on reconstructing the damaged highway as quickly as possible, although it's premature to lay out a timeline," Samour said. "We recognize how important U.S. 89 is to the community of Page and the Lake Powell region and that's why we met with key stakeholders today, including the mayor of Page. We will work through the process of determining what happened beneath the highway and figure out a best plan for a long-term fix."

Herman Shorty, chairman of the commision put together to come up with a fix, said the primary concern was assisting Navajo communities affected by the closure.

"We are asking for consideration that a state of emergency be declared," Shorty said.

The commission drafted an emergency declaration.

A week after the collapse, Coconino County Board of Supervisors Chairwoman Liz Archuleta signed a Declaration of Emergency.

"The closure of U.S. 89 to Page has disrupted many lives that rely on that stretch of roadway as part of daily life," Archuleta said. "Coconino County will continue to aid the Arizona Department of Transportation in minimizing the impact of this road closure on our county residents to the best of our abilities."

The county joined the Navajo Nation, city of Page and state of Arizona, all of which issued similar declarations. On March 8, Gov. Jan Brewer signed a state declaration of emergency, freeing up additional state resources to aid in the quick assessment and repair of U.S. 89.

Toward the end of March, the ADOT moved one step closer to creating a shorter detour route to Page and the Lake Powell area using Navajo Route 20.

At a special meeting of the State Transportation Board March 21, the board approved $1 million for improvements to Navajo Route 20 (N20), a Navajo Nation tribal road that runs parallel to U.S. 89, which would create a shorter detour route to Page and Lake Powell.

"ADOT has been working with the Navajo Division of Transportation, the Navajo Nation and the Bureau of Indian Affairs to pave N20 as an interim measure to shorten the detour route between Flagstaff and Page," said Dallas Hammit, ADOT deputy state engineer of development. "With assistance from the Federal Highway Administration, we are looking to use federal emergency relief funds to restore essential traffic in the region, while we work on the ultimate repair on U.S. 89."

Hammit added the detour was not a long-term solution, but would help thousands of people who were inconvenienced daily by the detour.

ADOT paved the road and ensured that it could carry commercial truck traffic while repairs were made to U.S. 89. ADOT expected the U.S. 89T project to take three to four months to complete.

In July, ADOT came up with a way to fix the portion of U.S. 89 damaged in the February landslide, but said the road would not be fixed for at least two years. That meant drivers had to continue to take U.S. 160 (Tuba City exit) and State Route 98, which is approximately 115 miles long and 45 miles more than the direct U.S. 89 route.

ADOT plans to cut back the mountain slope and construct a gravity buttress wall as part of the proposed solution.

ADOT assembled a team of geotechnical experts to examine the stability of the mountain slope that carried the damaged highway and searched for options available to reopen the roadway.

After an exhaustive geotechnical investigation that included geologic mapping, subsurface exploration and monitoring, laboratory tests and slope stability analyses, ADOT submitted the final report. The 463-page report concluded the recent landslide was a reactivation of a small portion of an ancient landslide, but little to no new movement had occurred since testing began.

ADOT used $35 million in federal aid money to pave Navajo Route 20 to make a shorter detour route for motorists until repairs are complete on U.S. 89.

Even though paving operations were complete, U.S. 89T remained an active construction zone. Until the fencing project was done, the road was open only during daylight hours (except for local residents) and a 25 mph speed limit was in place.

The construction project budget grew from $18 million to a $40 million effort in an unprecedented collaboration between ADOT, Navajo Division of Transportation (NDOT), the Bureau of Indian Affairs and the Federal Highway Administration. The road took 79 days to pave. FNF Construction finished the paving 11 days early, with assistance from AZTEC Engineering and RUMCO.

"This was a game-changing collaboration," said Paul Chaco, director of NDOT. "Not only did ADOT get this paving done in such a short timeframe, but we all came together to expedite the project."

ADOT lifted all restrictions on U.S. 89T after all fencing was installed. ADOT cautioned drivers that the road crossed through open range, and even with the fencing, the road was prone to animal crossings, including horses, goats, cows and dogs.

Along with fencing, crews finished final lane striping and installed recessed pavement markings to enhance safety along the corridor.

ADOT will maintain U.S. 89T while it is in use as a detour.