Sinquah steps in as interim superintendent at Hopi Jr./Sr. High 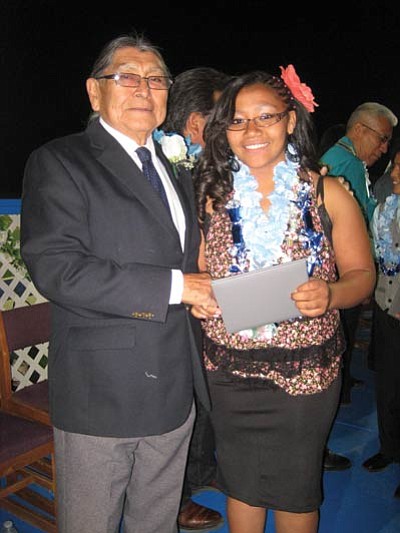 Albert Sinquah is the new interim superintendent for Hopi Jr./Sr. High School on the heels of Paul Reynolds resigning from the top job.

Reynolds, who was superintendent for 18 years, resigned for personal reasons. Each of the Hopi Jr./Sr. High School Governing Board members praised Reynolds for his years of service.

"I'm excited about the possibilities for improvements," Sinquah said. "I'm not blaming the past, but there's always new ideas. This is a fantastic opportunity to add to our successes."

Sinquah emphasized that Hopi Jr./Sr. High School already has several wonderful programs that other schools use as their models.

Sinquah said there are a lot of resources within the school that can move the school forward. He said the top three priorities are meeting the goals of Common Core, meeting the standards of the North Central Association and living within the budget.

Common Core, the new educational standards for Arizona and most states, has been introduced to the teachers at Hopi Jr./Sr. High, but Sinquah wants to assure that all the teachers are properly trained so they are familiar with the curriculum because it will be implemented next school year.

Sinquah said NCA would perform a quality review this school year. He emphasized that the proper documentation needs to be completed for NCA.

He said financial cutbacks will cause the administration to take a harder look at the school's priorities. He commended Hopi Jr./Sr. High Business Manager Patrick Secakuku for doing a good job of balancing the budget for the past several years.

"I want to make sure that students' needs continue to be met," he said. "Our focus is on academics, but all our other programs support that."

Sinquah said one of his tasks will be to work with Hopi High Principal Glenn Gilman because he has to learn more about the high school. As junior high principal since 2003, Sinquah hasn't had much contact with high school staff or students.

Sinquah doesn't plan any major changes during this school year because it would be difficult for staff. He is concerned about budget cutbacks, whether they are because of sequestration or other issues.

More community involvment with the school is another goal for Sinquah. He also wants to work closely with the Hopi Tribe to get tribal leadership more involved with education throughout the reservation. He said a united kindergarten through 12th grade system is needed on the Hopi Reservation.

Sinquah started in education as a teacher for Hopi Headstart in 1967. In addition to serving as Hopi Junior High School principal, he also served as principal at Keams Canyon Boarding School for the previous six years.

He worked in Washington D.C. as a community representative for the Indian Migrant Program. During this four-year span, he traveled throughout the U.S. to different reservations working with tribes and parents.

Sinquah started his post secondary education at Arizona State College, which the next year became Northern Arizona University (NAU). He was a music major in college. He eventually earned his superintendent credentials through NAU's educational leadership program.