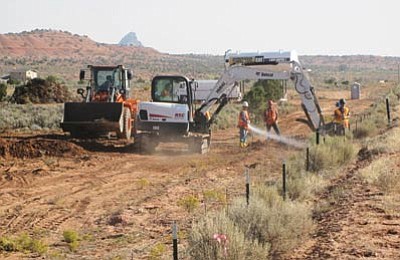 Workers hose down the Cove, Ariz. uranium clean up site to keep dust down. The process of cleaning up the Cove uranium transfer station involved digging up and hauling away tainted soil. Photo/Environmental Protection Agency

The Navajo Nation could receive $1 billion for uranium mine cleanup.

Navajo Nation Attorney General Harrison Tsosie announced Dec. 13 that the Nation prevailed in its claims against Anadarko Petroleum Corporation and Kerr-McGee Corporation involving a number of former uranium mines and one former Kerr-McGee uranium processing site. The sites are located in Cove, Ariz. and Shiprock, N.M.

Navajo Nation President Ben Shelly said work on the bankruptcy case began when he was vice president and Louis Denetsosie was attorney general.

"The Shelly-Jim administration has made mine cleanup a priority," Shelly said. "In April, we met with Allison Macfarlane, chairman of the U.S. Nuclear Regulatory Commission about prioritizing cleanups on the Navajo Nation. Any funds resulting from this lawsuit are welcomed and long overdue. The Navajo Nation Department of Justice and Navajo Environmental Protection Agency worked together to bring this effort to finality."

U.S. Bankruptcy Court for the Southern District of New York Judge Allan L. Gropper's Dec. 12 decision found the defendants Anadarko and Kerr-McGee acted to "hinder and delay" certain creditors, including the Navajo Nation, when Kerr-McGee "transferred out and then spun off" oil and gas assets, leaving the spin-off companies "insolvent and undercapitalized."

The Navajo Nation is one of a number of claimants in the case. Other claimants include the U.S., 22 states, four environmental response trusts and a trust for the benefit of certain tort plaintiffs. Prior to the trial this group of environmental and tort claimants reached an agreement on how they would distribute any money awarded by a victory.

While the proceeds distribution formula is complicated, Tsosie said 88 percent of all proceeds go to the group of environmental creditors, including the Navajo Nation. The remaining 12 percent will go to private tort creditors and for administrative expenses. Of the 88 percent distributed to environmental creditors, 23 percent will be available for use in cleaning up former Kerr-McGee abandoned uranium mines located on the Navajo Nation and the former Shiprock Mill site.

Gropper's decision found that Anadarko and Kerr-McGee are liable to the plaintiffs for damages, setting a range for such damages between $5.1 and $14.1 billion. The exact amount of damages will be determined after briefing the parties.

Tsosie said appeals are likely but the ruling could result in $1 billion to be used to clean up uranium contamination from past uranium mining and processing on the Navajo Nation.

"We want to thank our outstanding litigation team, which included attorneys from the Chicago-based firm of Kirkland & Ellis, John Hueston of the Irell and Manella Firm from Los Angeles, the Office of the U.S. Attorney for the Southern District of New York and representatives of the U.S. Department of Justice in Washington, D.C.," Tsosie said.