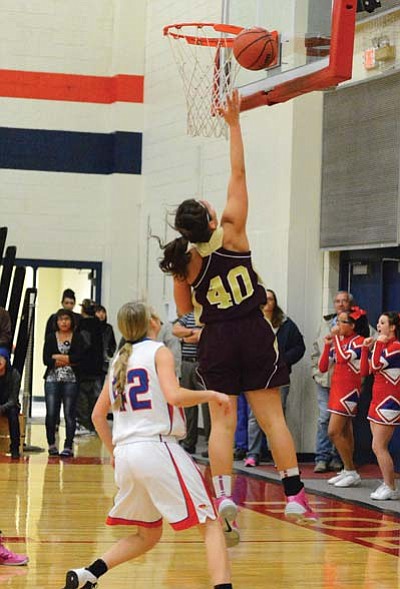 The Lady Bulldogs lost their first two games in the Gallup Invitational Tournament and won their final contest. This tournament has historically been a tough test for the Winslow girls and has provided most of their losses even in years when the team won a state championship.

Winslow has a talented team and should be serious contenders for a state title this year. This tournament was probably an important experience in building a team that will challenge for a state title.

In other games on Thursday the Cleveland Storm defeated the Kirkland Central Lady Broncos 60-54 and the Clovis Lady Wildcats defeated the Albuquerque St. Pius Lady Sartans 73-61.

Friday saw another close loss for the Lady Bulldogs as the Albuquerque St. Pius Lady Sartans edged Winslow 54-53. Winslow led 15-12 after the first quarter but trailed 28-24 at the half.

The Lady Bulldogs regained the lead 44-41 in the third quarter but lost the game by a single point in the final period.

In other games on Friday, Clovis defeated Miramura 65-28 and Gallup defeated Cleveland 81-43.

On Saturday the Lady Bulldogs finally pulled out a win of 69-43 over the Wingate team. The Lady Bulldogs led 20-8 at the end of the first quarter and 48-30 after three quarters of play.

In other games on Saturday, Miramura defeated Cleveland 57-49 and Clovis defeated Gallup 66-42 for the championship.