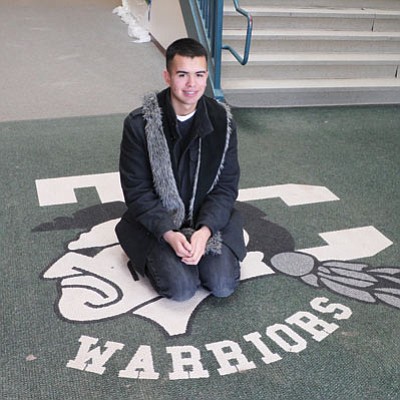 Tuba City High School senior Isaac Manrique has won the prestigious Reischauer Scholars Award from Stanford University for 2014. Manrique is one of 25 nationally selected students, and the first from Tuba City, who will participate in the program this year. Photo/Rosanda Suetopka Thayer

TUBA CITY, Ariz. - Tuba City High senior Isaac Manrique, the son of Kathleen O'Neill and José Manrique, has earned a spot in Stanford University's 2014 Reischauer Scholars Program (RSP). The program selects 25 exceptional high school students every year from throughout the United States to engage in an intensive study of Japan.

Currently in its eleventh year, the program runs from February to June and provides students with a broad overview of Japanese history, literature, religion, art, politics, economics and contemporary society with a special focus on U.S.-Japan relations.

Ambassadors, top scholars and experts throughout the United States and Japan provide online lectures and engage Reischauer student scholars in live discussion sessions. The program requires students to complete weekly readings and assignments and to participate in discussion forums. Final coursework culminates in an independent research project. The projects are printed and bound as a journal of yearly scholar recipients. Students also lead two presentations on Japan in their home school or home community.

Students who complete their five-month internship receive a Stanford University continuing studies credit and a certificate of completion from the Standard Program on International and Cross-Cultural Education.

Manrique has lived most of his life on both the Hopi and Navajo reservations with his mother. He also lived in Alaska for a few years. That cross-cultural living and educational experience has added to his interest in other countries and cultures and is what sparked his interest in applying for the Stanford honor.

"It was narrowed down to ten, then to seven and we were then notified that Isaac made the final cut," she said. "Isaac is an excellent example of Tuba City high academic preparedness. Isaac is in the National Honor Society, he's in ROTC, he wrote and directed a French revolution play last year, he is very disciplined and the school district is fully behind his continued academic career. Isaac is also just one of the nicest, most inquisitive students you would ever want to meet as well."

Manrique, who took the PSAT test last October, was recognized as one of 14 2013 National Hispanic Recognition Program Scholars and was also commended in the 2013-14 National Merit Scholarship Competition from Tuba City High School.

Manrique credits his parents and his three older sisters who are all in college with providing constant academic encouragement, along with his English teacher Linda Miller.

"I was able to attend a University of Arizona summer course and it was great...I had the chance to do my own thing, depend on my own self, learning how to structure my personal time to study and then also to have some fun," he said. "Everyone at Tuba City High who knows me were so supportive and would always check on my progress to see if I needed help or information that would move me along in my career choice. I feel very lucky to have gone to school here."

The Reischauer Scholars participate in virtual classes during their internship from February to June and are expected to allot as much as six hours a week to complete lectures, discussions, readings and assignments. This is the first time Tuba City High will participate in a virtual learning experience with Manrique as the school's pilot student.

Tuba City High hopes to add online learning courses in both mathematics and English beginning in grades 8 - 12 this year to its college prep program.

Students could access these programs 24 hours a day, seven days a week, which will allow greater flexibility and greater freedom for students. The approach will also help students who live in rural, remote areas on the reservations who currently rely on long distance bus transportation to get to and from school every day.

The district is also considering outfitting its school buses with wireless Internet access that will allow its students to complete on-line academic work while traveling to and from school. Many of the students travel as much as 90 minutes to and from school each day.

Manrique has applied to Massachusetts Institute of Technology and said he would like to also apply as an exchange student to Japan after graduation.