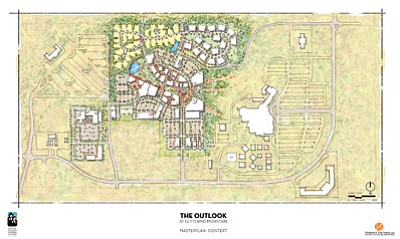 A conceptual drawing of planned expansion on 70 acres next to Twin Arrows. Navajo Nation Shopping Centers, Inc. has submitted plans to the Coconino County Planning and Zoning office for a development named The Outlook at Glittering Mountain that could include shopping, theaters, a bowling alley, a video arcade, laser tag, snack bar and indoor mini golf. Photo/Navajo Nation Shopping Centers, Inc.

"As a company, we're doing great," Watchman said. "Twin Arrows is a little behind schedule."

But Watchman said things are not as dire as some people think. The Gaming Enterprise borrowed from the Navajo Nation to pay for the casino. While some of the payment on the principle of the loan has been postponed, the gaming enterprise is paying interest for the loan back to the Navajo Nation.

"I guess I beg to differ with what folks are saying," Watchman said. "We're doing our part, we're paying interest to the tune of $22 million [this year]. That's a lot of money for a brand new enterprise. The Nation is deriving great returns off of us."

"In order for us to grow, we borrowed from the Nation and we have a huge interest rate so we're paying to the Nation, people don't realize that," Watchman said. "For salaries and benefits, we're paying roughly $45 million a year. For our people who are Navajos, they have jobs and they're making money. Forty-five million dollars is coming back to the Navajo economy."

Yet Watchman acknowledged that the casino needs a good year to achieve the results the gaming enterprise wants.

"We're holding our own and we're slowly penetrating the markets that we intended to penetrate, Flagstaff, northern Arizona and Arizona," Watchman said.

He added there were challenges in opening Twin Arrows in the middle of May, including hiring enough employees.

"All of our employees had to get gaming licenses, so that took us the course of the summer to get a critical staff level. By the end of the summer, we were there," Watchman said.

Another issue for the casino is continued construction, which in phase two included adding 110 rooms to the resort. Watchman said that from I-40 it can look like the casino is still under construction instead of open for business. He said another reason for the slow start is the lack of new signs or billboards, which are prohibited in Flagstaff and Coconino County. A recently installed digital display adds to the casino's presence, Watchman said. And the government shut down did not help any either.

"We're slightly behind schedule but we're only six months old," he said. "A year from now, we're hoping that we'll have great improvement and we'll be able to grow our business."

Watchman said one of the keys to that improvement is expanded marketing for Twin Arrows. He recently hired a new marketing director with a background in casinos, hotels and hospitality enterprises in metropolitan and rural places.

"He has some great new ideas," Watchman said. "In my opinion, Flagstaff has not had the opportunity of being very close to a casino...we just need to let everybody know we are in the area."

While Watchman said improving the casino's presentation and customer service were two ways to increase business, he recognized that becoming more family friendly is important. The casino is building a children's center with an arcade, a buffet and other amenities.

"That wasn't our primary, original goal but we recognize that our customer base do have children," Watchman said. "We have 65,000 people registered in our players club and now we have a great idea of what they need and want so we're fine tuning our program to cater to what our customers need and want."

Watchman explained that Gallup and Farmington have different markets than Flagstaff and different demographics.

"We got spoiled because Fire Rock and Northern Edge, out of the block, were going very well. Twin Arrows is technically following what most businesses experience when they start up," Watchman said. "For a business to reach its goal takes about three years."

On May 1, there will be a grand reopening, which Watchman hopes will improve Twin Arrows' presence and array of services.

In 2012/2013, Navajo Nation Shopping Centers, Inc. acquired a total of 70 acres next to Twin Arrows for a development named "The Outlook at Glittering Mountain."

According to Nathan Begay, CEO of Navajo Nation Shopping Centers, the name represents the San Francisco Peaks as one of the Diné's sacred mountains. The group has submitted plans to the Coconino County Planning and Zoning office. Officials at the P&Z office said the application and file are not complete and no activity on the plans will take place until the file is complete.

Begay said the 70-acre parcel of land will be developed over a 10-year period in three phases which will include an entertainment center, retail stores, cultural center and housing.

"I welcome the shopping center and other Navajo enterprises to help develop the Twin Arrows area," Watchman said. "We have an opportunity to provide another asset for the Nation so that the Nation can have a return on their investment."

Navajo Nation Shopping Centers is still looking for money to pay for the project.