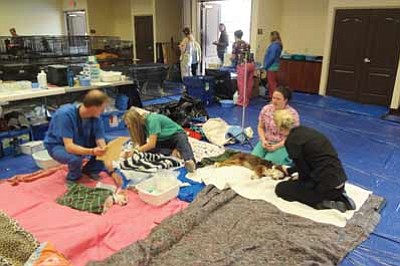 TUBA CITY, Ariz. - The Tuba City Humane Society offered a free spay and neuter event for dogs and cats in The Gap and surrounding areas Nov. 16 and 17.

Best Friends Animal Society and Soul Dog Rescue sponsored the event and the Tuba City Humane Society, along with Dr. Carol Holgate and the Moenkopi Legacy Inn, were the hosts.

During the weekend, the veterinarians spayed and neutered 167 animals, rescued 24 dogs and cats and performed 836 vaccinations. Animals came from the upper and lower villages of Moenkopi for the surgeries. Vet techs examined injured and sick animals and the veterinarians determined what needed to be done for those animals. Some animals came in with broken legs, mange and abscesses. One animal came in with a stick in its eye and a canine transmissible venereal tumor. Animals were also given new collars, leashes and dog food.

Three conference rooms at the Moenkopi Legacy Inn were set up for pre-op and surgeries, recovery and 100 kennels for the animals.

Sylvia Moore, president of the Tuba City Humane Society, said volunteers, vet techs and vets, including Holgate were on hand to closely monitor the animals and check the kennels. There were tours available for those who wanted to see what was going on inside.

"It was a good educational experience for them to see how animals should be treated and they were all quite impressed and had no idea what these surgeries entailed," Moore said. "Each animal that had surgery also received their vaccinations, de-wormer, flea and tick treatment, a toe nail trim, a new collar and a sack of food to take home."

Soul Dog took all the other puppies, kittens, two dogs and a cat. Best Friends took five dogs with broken legs to Kanab, Ariz. where they will have surgery and be rehabilitated. Two of those animals with owners will be returned when they have recovered. The other three will be adopted along with a stray that had been at the hotel for months.

For anyone who was not able to get their animals to the event, Tuba City Humane Society has grant money for low cost spay and neuters through Holgate for $45. Her phone number is (928) -283-6184

"We hope that owners will bring their animals to Dr. Holgate for continued treatment. Her clinic is always available for large and small animals in Tuba City," Moore said. "Fortunately the Humane Society has been able to consistently secure grants for low cost spays and neuters. Our rescued dogs and cats depend solely on your donations to cover their vet bills."

Moore thanked John Garcia of Best Friends Animal Society, Shelby Davis of Soul Dog Rescue and the American Society for the Prevention of Cruelty to Animals for bringing these much needed services to Tuba City and working alongside Tuba City Humane Society and Holgate.

"We are both proud and grateful to partner with you. Thank you to all the vets, vet techs and volunteers who helped with the clinic and to the people who love your animals and brought your pets to receive services," Moore said.

She also thanked the Moenkopi Legacy Inn and Suites for hosting this event.

"As everyone said, 'This is the most fabulous place that we have ever used for such an event, plus the hotel rooms were awesome,'" Moore said.