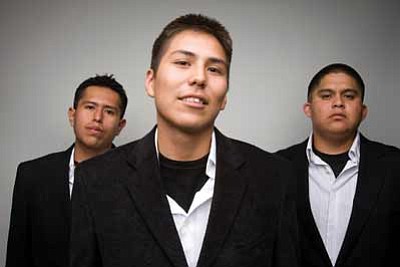 The Plateros take the stage at the Moenkopi Legacy Inn Dec. 14. Submitted photo

MOENKOPI, Ariz. - The Plateros are a southwest native rock band from Tohajiilee, N.M. and will be in concert Dec. 14 at the Legacy Room within the Moenkopi Inn and Suites. Legacy Music Productions will play host to the concert.

"I feel great about being able to bring some Native American blues and rock to Tuba City," said James Surveyor, marketing and special events manager for the Moenkopi Legacy Inn, adding that this is the Plateros' first visit to the Legacy Room.

Members of the Plateros are Levi Platero, 21, Douglas Platero, 30, and Bronson Begay, 23. Levi plays guitar and sings, Douglas plays drums and Begay plays bass. The band members began playing their instruments when they were toddlers and have never stopped playing. The group has played together for four years.

As a young boy Levi Platero grew up in a Christian home and wasn't allowed to listen to metal, rap or classic rock. His life revolved around church, which is how he learned to play the guitar. The only music he could listen to was blues musician Stevie Ray Vaughn. Platero became infatuated with Vaughn as he learned to play the guitar like him. But as he got older, he was allowed to listen to other types of music and took advantage of that by incorporating that type of music with his own.

"There is no real genre for our style of music because we have been called blues or blues/rock, so we labeled our music as southwest native rock," Platero said.

Platero said he has always loved music but never thought of pursuing it as a career because it is what he loves to do and he loves sharing his music with people. The benefits of getting money in return never crossed his mind. Although he knows now he is making a career of it, it is still his passion.

Plateros music sends a positive message to his listeners. Recently, he has started listening to the lyrics in the music as he writes his own music. He writes about hanging on when someone is at their lowest and about hope and love. He wrote a break up song about when a person knows a relatinship is not going to work and hey wait around for it to end.

"I try to write love songs, but I'm just a young buck so I really don't know what love is. I can only imagine what love is like, but I don't think I can write a song about it," Platero said.

In February, the Plateros opened for Los Lonely Boys. Platero said opening for the group was one of the biggest breaks for the band. He said he always wanted to open up for them when he saw them at the age of 13. It took 10 years for a break like that to happen. They played for a crowd of more than 600 people that night.

The Plateros have played in Washington D.C., Seattle, Niagara Falls and Canada. They have a big fan base in Phoenix and Sioux City, Iowa.

God and Stevie Ray Vaughn are major influences in Platero's career as a musician and his mom and sisters are his major supporters.

He hopes people that go to the concert expect to see a great show and to be encouraged and influenced by the Plateros; music and enjoy themselves.

More information on the Plateros is available at Plateros.com.

Joining the Plateros is Ed Kabotie, a local reggae artist who is Tewa and Hopi and Skool Boy Kook.

Tickets are $10 in advance and $15 the day of show and are available at the Moenkopi Legacy Inn and Suites front desk.