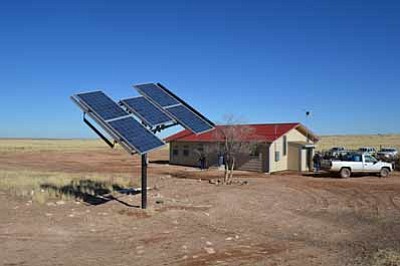 CANYON DIABLO, Ariz. - The George family is eager to move into their new home and have electricity for the first time. Until last week, these elders and their handicapped children have lived off the grid in a makeshift two-bedroom dwelling built with toxic railroad ties and a badly leaking roof.

On Dec. 6, they moved into their new home. This green building is a technological showcase that demonstrates economical and innovative ways to bring electricity, clean water, and heating and cooling to off-grid Navajo families - even in an unforgiving environment where temperatures vary from -30 to 110 F. More importantly, the home is a testament to the Navajo people's ability to live in harmony with nature.

Several thousand Navajos still live without electricity and running water. Often, they drive 50 miles or more over dirt roads to get wood and water and light their houses with kerosene lamps. Because they don't have power, many Navajos can't store fresh foods and medicine, or run medical devices.

Elsa Johnson, director of the Navajo non-profit IINA ("life" in Navajo) Solutions, said it is gratifying to help bring electricity and other clean energy to her people.

"I left the reservation nearly 30 years ago and I see that little has changed, especially for the elders, so I developed an initiative to help marginalized tribal members," she said. "Thousands of my people still live in survival mode without power, fresh vegetables, or clean water."

That's changing thanks to an ambitious project called Plateau Solar and Wind. Founded in 2011 by Johnson and green building expert Mark Snyder of Mark Snyder Electric, the project has already brought sustainable electricity and water to 40 underserved Navajo elders. And the George family's new home - the first energy efficient residence on the Navajo Nation - is the next major milestone for Plateau Solar and Wind.

At the heart of this renewable energy-powered home is Snyder's creation, the world's first climate-controlled building that attaches to the home and shields batteries and other components from harsh weather and extreme temperatures. Called EMPUS Bump-out, this patent-pending 4x8 foot building features P2000 super-insulation, a 500-gallon water tank and a solar water pump.

"Because they don't have electricity, many elders drive for hours to haul wood. A truckload of cut wood is very expensive for them," Johnson said.

An advocate for the natural environment, Johnson loves the beautiful forests on the reservation. She is excited their systems won't contribute to deforestation.

"The harsh environment, poor equipment selection, and improper maintenance doomed other groups' attempts at off-grid electrification to fail decades earlier than they should have," said Chip Johnson, western sales manager at Fremont, Ohio-based Crown Battery. "When Mark Snyder came to us, we were excited about the project and about how he tested and chose components to make sure the Plateau Solar and Wind systems would last for decades."

Each solar system is designed to last 25 years with proper maintenance and to withstand severe weather. And it's part of Johnson's vision and a larger movement to empower rural Navajo people.

To help address the high unemployment rate on the Navajo Nation, Plateau Solar and Wind trains local workers to plumb, wire, rewire and retrofit houses, as well as install and maintain solar systems built to national codes and standards. The George family's home is an example of how a green team can economically turn a standard tribal housing product into a super energy efficient home.

"It's an amazing feeling when you can light up people's homes, faces, and lives," Johnson said. "We stay in touch with the elders we've helped - in fact, we just helped the Georges get a new refrigerator and stove for their new home. And by working in harmony with the land - and teaming up with a fantastic group of partners - we've designed one of the world's most cost-effective alternative power and clean water solution, and a super-efficient home. Now, we're looking for partners to help us in our efforts to improve the well-being of underprivileged people in tribal communities here and elsewhere."

More information about the project is available at www.iinasolutions.com and www.marksnyderelectric.com.