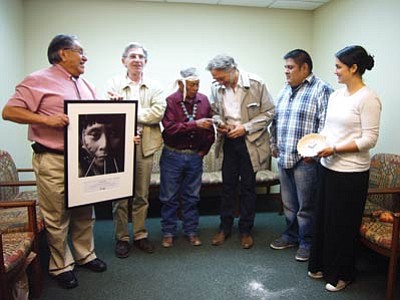 PARIS - Once again, a French judge in Paris has ruled that an auction house in France may go forward with an auction of objects sacred to the Hopi. The auction house will also sell six similar objects which come from the Zuni tribe in New Mexico.

The auction took place at the Eve Auction House on Dec. 9 and continues Dec. 11.

In April, a French judge ruled similarly, letting the Neret-Minet Tessier & Sarrou house go forward with an auction where 76 Hopi sacred objects were auctioned and generated $1.2 million from the sale.

Lawyer Pierre Servan-Schreiber of the firm Skadden, Arps, acting for Survival International, an advocacy group which normally campaigns to stop indigenous people's lands from being stolen from them, and the Hopi tribe went to court Dec. 3 asking the court to stop the auction. Servan-Schreiber cites the French law, which prevents the sale of tombs, giving them protected status in France as a reason to stop the sale.

The French judge, Claire David, who presided over the case, delivered her verdict against the Hopi tribe on Dec. 6.

"While the sale of these cultural objects can constitute an affront to the dignity of the Hopi tribe, this moral and philosophical consideration does not in itself give the judge the right to suspend the sale of these masks which is not forbidden in France," said David, according to Expatica.com, a news and information site for the international community.

Servan-Schreiber said David presented reasons, some conflicting, about whether the Hopi tribe had the right to sue, and that while the Hopi Tribal Council has the ability to prevent the sale, it has not been established whether the tribe could take legal action.

David also said that the tribe had not demonstrated that the sacred objects in a private collector's possession had not been gifts or transfers from members of the Hopi tribe.

"I have seldom seen such warped reasoning," Servan-Schreiber said. "All of this leads me to believe that there is a concerted willingness by the French judicial (at least) authorities to deny the Hopis and other Indian tribes even the possibility to have their day in court."

Despite the objects' spiritual value to the Hopi, David said one reason she allowed the auction is because the objects are not art objects and have no monetary value. She said that the objects convey an emotional and cultural value as they embody spirits but "such elements are insufficient to [liken] such objects to tombstones, since they do not relate to the rests of human bodies, thereby justifying...the respect owed to dead people, but only to the spirit of the dead."

After the auction, Survival International disagreed with the judge's ruling and said the French courts have once again shown themselves unable to prevent these "shameful auctions of objects that are highly sacred to a living culture."

"The Hopi have pleaded eloquently for these objects, which hold such religious importance to them, to be returned. The insistence of the auction houses in carrying on with their sale is a disgusting slap in the face to people who deserve to be treated with respect," its statement said.

In the United States, the Native American Graves Protection and Repatriation Act (NAGPRA) protects similar items from sale. NAGPRA, enacted in 1990, details a process for the return of cultural items such as sacred objects or objects of cultural patrimony to their rightful American Indian tribes and organizations. But the law does not have jurisdiction outside of the United States.

While France was the first to sign a resolution enacted by the National Congress of American Indians (NCAI) based on Article 12 of the United Nations Declaration on the Rights of Indigenous Peoples (UNDRIP), which supports the repatriation of such objects from other countries, this resolution is not binding.

While he disagrees with the verdict of the court in this case, Servan-Schreiber believes that the sale of sacred objects will be stopped in the future, whether by a change of international law, French law or French case law.

"I strongly believe that our arguments were very valid and that we should prevail, eventually," Servan-Schreiber said. "We are, however, facing a strong political opposition."

In April, Servan-Schreiber bought one of the Hopi sacred objects for the express purpose of returning it to the Hopi. He returned the sacred object in July. He said that while his origins are not connected to Native Americans, he simply believes not everything should be bought and sold.

"The Native American tribes have been massacred, deported, placed in reservations, politically and socially ostracized," he said. "Maybe, at some point, the dominant, white western culture could give them a break and respect their desire to see their most sacred katsinas not be publically exposed or sold."

Servan-Schreiber said he finds it sad that the Hopi encounter so many difficulties when trying to protect their heritage.

"The Hopis that I met impressed me with their dignity and their subtle, but constant, spirituality," Servan-Schreiber said. "The western world, to which I belong, seems to forget that, without some spirituality, men are only consumers and that if we are only consumers, we will destroy everything we proclaim we stand for: peace, Earth, democracy, etc."