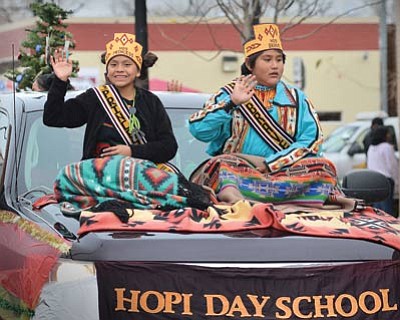 WINSLOW, Ariz. - Floats began rolling down the 67th annual Winslow Christmas Parade route at 1 p.m. Nov. 23 just after the rain stopped. A steady rain fell all morning with snow at elevations above 5,000 feet.

The theme of this year's parade was "All Aboard! Christmas On The Holiday Express." Santa Fe Indian Marching Band alumni and current members served as the Grand Marshals. The number of parade entries was reduced significantly because of the foul weather. The parade looked to be about one-third the length of a good weather parade.

Vendor turnout was low as well, numbering around a dozen mainly clustered near downtown and the Route 66 Park on Third Street.

The Winslow Indian Health Care Center's float was a large black steam engine mockup, which was particularly nice. Parade turnout from the Navajo Nation and the Hopi Tribe was impressive, making up the majority of the parade elements.