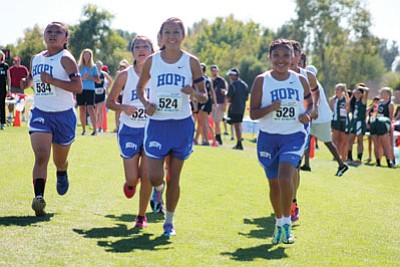 Flagstaff Northland Prep's star Valentina Nyhart, a freshman, was the individual state champion with a time of 19:39.

Hopi High Coach Laverne Lomakema said every team she has coached has been special, but each team has been different because the teams have different chemistry and are unique in their own way.

"This year was special and particularly satisfying because it was mostly seniors," she said.

"They all wanted to finish their senior year with another state championship," the coach said.

Lomakema said two-thirds of the team members were seniors this year. Next season will be a rebuilding season, but she noted Hopi High has won state championships in rebuilding years. She said winning seven straight state titles is something the girls should be proud of accomplishing.

"After two or three titles, the team becomes a target and it's harder to repeat. It's more intense, but the girls take pride in continuing the streak," she said. "It takes commitment, dedication and sacrifice because it takes a lot of work."

Lomakema said the Lady Bruins not only ran to the best of their ability at state, but also ran an extraordinary race. All of the girls who ran last year improved their times by at least 15 seconds. She said this group of girls also showed great leadership.

"Not just the varsity, but the entire team. They knew what to do. They taught the freshmen and the sophomores. I didn't have to do as much hand holding as past years," she said.

According to Lomakema, having a strong pack time was Hopi's strength throughout the season. Pack time is the time between the team's best runner and fifth runner. At the start of the season, it was one minute and 20 seconds. At sectionals, it was 42 seconds. At state, it was 35 seconds. She said the runners proved they were unselfish because they would tell the other girls on the team to go ahead if they weren't going as fast.

Lomakema said winning the state championship was great, but more important was the message that hard work pays off for any goal, whether it's getting to college or getting good grades in a hard college class.

Lomakema said she and assistant coach Sharon Begay appreciated the support from the fans, the administration and especially the parents.

"I would especially congratulate the seniors who have dedicated their high school careers to being the most dedicated and motivated group of girls I've seen in a long time," he said.

Gilman said he also wanted to acknowledge the hard work and dedication of coaches Lomakema and Begay in their pursuit of excellence.

Ben, a senior, said she was glad that Hopi High accomplished their goal for the season.

"This year was more sad because it was our last races and there was more competition," she said. "But we ran our best race of the season."

Ben said the rolling hills on the course were the worst, but overall the course was okay and challenging.

Ben said the race was more competitive this year than in past years, but the Lady Bruins stayed focused on their goals, stayed motivated and ran together as a pack. She believes that the Hopi High girls next year will have a good chance of bringing back another state title.

Ben also runs for the track team. She is a member of the student council and Mathletes. She plans to go to Ft. Lewis College to major in criminology. She has a perfect 4.0 grade point average.

She is the daughter of Merledine and Farryl Yazzie of Low Mountain.

Josytewa, known as Mighty Mouse, said she was happy and proud that all of the season's hard workouts paid off. She said that despite the tougher competition this year, the Hopi High girls felt confident that they were going to win.

"Our team worked hard and deserved their title," she said. "The course was tough, but I knew I needed to finish the race hard."

Josytewa, a senior, said the heat slowed her down, but she kept thinking of the team and that kept her running strong to the finish line.

"We tried to stick to our plan and stay together in a pack," she said. "There were a lot more gifted and hard working runners from other schools this year, so we had to step up."

Josytewa said she hopes that the returning runners keep running to keep the tradition going.

"The team will be strong in their own unique way. I think they can win another title if they work hard during the off season," she said.

Josytewa, who also plays basketball, is in the Gifted and Talented program.

She is the daughter of Sara Tuvequaftewa and Guy Josytewa of Shungopavi.

Lomayestewa, editor of the Hopi High award-winning Bruin Times newspaper, said she was proud and happy that the Lady Bruins won another state championship so they didn't break the winning streak.

Lomayestewa, a senior, said this year was different because she knew it was her last year to run state for Hopi High.

Lomayestewa said the Lady Bruins ran a good race because each of the runners gave it everything they had.

"I loved the course. It was tiring, but challenging," she said. "The race was competitive. We had a lot of competition, but we overcame it."

Lomayestewa said coach Lomakema gave a speech before the race that inspired her. She expects the Lady Bruins to step up next year to win another state title.

Lomayestewa also plays basketball and runs track. She is in the Gifted and Talented program.

She is the daughter of Gladys and Dwayne Lomayestewa of Shungopavi.

Lomayaktewa, a senior, said the state championship made the Hopi High runners feel that they had accomplished their goal because of all their hard work.

She said the Lady Bruins ran a good race.

"But it was tough because of all the rolling hills at the end, but I gave it all I've got," she said.

Lomayaktewa said the race was competitive because of all the teams that wanted to beat Hopi.

"The key was for all of us to stay close together and give it all we've got until we can't feel anything," she said.

She is the daughter of Genevieve Humeyestewa and they reside in Second Mesa.