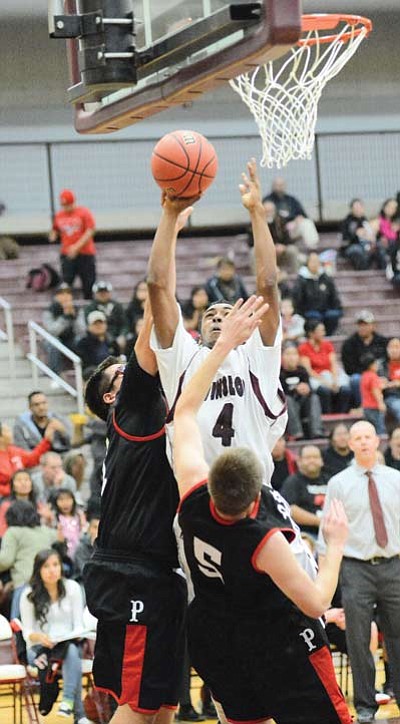 Demetrius Gamez powers past Page defenders to put two more points on the board. Photos/Todd Roth

WINSLOW, Ariz. - The Winslow Bulldogs and Lady Bulldogs both won their season opening games against Page Nov. 26 at the Petranovich Gymnasium. The boys won 57-41 and the girls prevailed 53-39. Both Page teams were highly talented opponents and could well be serious competition for a state playoff berth.

Both teams were scheduled to play host to Window Rock teams Dec. 3.

Sedona Dec. 5-7. The girls will play in the Gallup Invitational Tournament in Gallup, N.M. on those dates. Both tournaments will provide good

competition and should help the Winslow teams prepare for the season to follow.

The Lady Bulldogs will play the Joseph City Lady Wildcats in the opening round of the Winslow Winter Classic Invitational Tournament at Winslow Dec. 19 and continue to play in that tournament on Dec. 20-21.