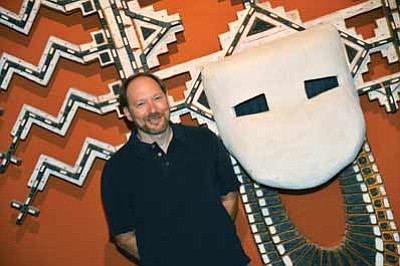 Artist Dan Lutzik stands in front of one of his pieces. Photo/Todd Roth

WINSLOW, Ariz. - Dan Lutzik wears many hats. He is the manager of La Posada Hotel, the owner of Snowdrift Art Space, and a fine artist in his own right. The Navajo-Hopi Observer recently sat down with Lutzik to talk about his "artist hat" while he took a break from his duties at La Posada.

How long have you been in Winslow?

I moved here in September of 1994, I'm coming up on my 20 year anniversary. Not only is next year a big year for residing in Winslow but my building, Snow Drift is turning 100.

How did you come to select Winslow as the place to settle?

After graduating in 1994 Allan Affeldt, Tina Mion came as a group to Winslow. We were looking at the present La Posada building as a likely building to refurbish since it had much historical value. Tommy Thompson took us on a tour of downtown Winslow. Many buildings were deserted not even boarded up. Tommy had a vacant building which had been the Winslow Post Office which he offered free to Dan for first year and alease option after that time. I stayed there for eight years after which I moved over to the Snow Drift building.

Your art is very distinctive, can you tell me how you got started with your art style?

As a child I used our basement as sort of a studio where I would build various assemblages. In college I majored in physics but after three years became disenchanted with science. I went to the fine arts area, where I took some courses in visual fundamentals and found it was a good fit for me. Then when I moved to Winslow and was involved in historic restoration, all the materials taken from and used in restoration became naturally occurring supplies for art projects. During years of restoration at La Posada I was influenced by the Hispanic and Hopi visual forms I encountered. Those forms and icons became a way to build my own language of art.

How did you get involved in the plywood art object methodology?

As far as plywood is concerned, first it was a readily available material and second plywood is extremely adaptable and forgiving. It's meant to be a very stable utilitarian material and I like that. Using plywood promotes an additive art process layer upon layer.

Are you able to display your art pieces outside of Winslow?

I had a big show in downtown L.A. but it was a tremendous amount of work the move the pieces to and from L.A. safely. It takes so much time, I'm resistant to doing that again.