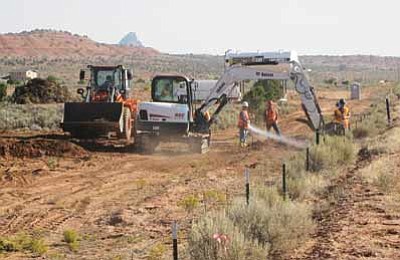 Workers hose down the Cove, Ariz. uranium clean up site to keep dust down. The process of cleaning up the Cove uranium transfer station involved digging up and hauling away tainted soil. Photo/U.S. Environmental Protection Agency

WINDOW ROCK, Ariz. - The Navajo Nation played host to a tour of uranium mine cleanup projects across the Navajo reservation for federal organizations on July 15-19 to assess how effectively federal agencies are addressing the cleanup of the mines.

Representatives from Congress who have oversight on budget and expenditures from federal government agencies requested the meeting and tour.

The tour began at the Cameron Chapter and went through Tuba City, Oljato Chapter, Teec Nos Pos, Red Valley and Cove and ended in Baca Prewitt Chapter in the Eastern Navajo Agency.

In order to determine the level of accomplishments cited by federal agencies in April 2013, GAO officials wanted to see uranium mine cleanup sites and other sites still needing clean up, meet with affected communities and see if cleanup projects match money sources or whether more money is needed. The GAO officials wanted to hear first-hand experiences from Navajo Nation staff who have worked on the projects since 2008.

The tour included a visit to a site that is affecting the Little Colorado River near Cameron and a tour of the Tuba City Open Dump.

Officials heard from Cassandra Bloedel with the Navajo Nation Environmental Protection Agency Resource Conservation and Recovery Program (NNEPA). She was instrumental in cleaning up contaminated soil from the Highway 160 site along with the U.S. Department of Energy (DOE). Another site visit included a harrowing drive to the top of Holiday Mesa to the Skyline Mine interim repository in Oljato Chapter.

On the third day, the tour visited Teec Nos Pos, some mines in Red Valley Chapter and a cleanup site in the Cove community. At each of these Navajo communities, Navajo people affected by the uranium mines met those on the tour and voiced their concerns.

In Cameron, Angie Begay told federal officials about her fear that uranium mines may expose radiation to her grandchildren. Other community members thanked the officials for their visit. Others expressed strong concerns that uranium mines, especially those located on the Lukachukai mountains, are affecting surface runoff that farmers in Cove, located below the mountains, use for subsistence gardening.

James Benally, Cove Chapter President, expressed concerns about the need for remediation under the Comprehensive Environmental Response, Compensation and Liability Act (CERCLA) authority because of its protection of wildlife, plants and human beings.

The GAO tour concluded July 19 in the Haystack community where EPA and NNEPA staff demolished homes built with contaminated materials. The Community Housing and Infrastructure Department (CHID) from the Navajo Nation Division of Community Development is building new homes. The Contaminated Structures Program is scheduled to continue.

During the morning, the group visited with a community member living within a few hundred yards of a newly constructed temporary repository for uranium contaminated materials in the Casamero Lake area.

She told a story about various cancers that have spread through many generations of her family and have now affected her directly. She pleaded with the government representatives to help her in relocating from the area.

Unfortunately, the structure she resides in does not meet EPA requirements for demolition and replacement. The ground in the area is still heavily affected by past uranium mining and members of the group were advised to vacate certain nearby areas immediately because of high radiation readings.

The GAO plans to issue a report of its site visits by February 2014.