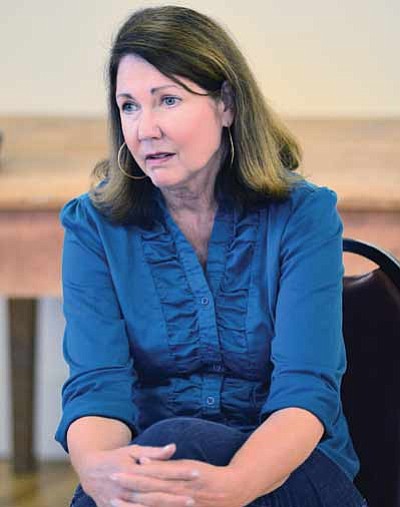 It was a small group meeting at the Hubble Trading Post from 11 a.m. to 11:30 a.m. Kirkpatrick's assistant Ron Lee was present, as well as Winslow Mayor Robin Boyd, Jim Ferguson, Paul Ferris, Loy Engelhard, Tess Kenna, Peggy Adams and Harold Soehner. Kirkpatrick was on a "listening tour" to find out about local governments' most pressing needs which she might be able to take to the federal level.

Boyd and past city manager Ferguson raised concerns about the Four Forest Restoration Initiative's slow progress, the Federal Aviation Adminstration complications around the improvement of the Winslow Airport and the release of old golf course property from National Parks control. Ferris explained how Winslow is working to improve economic activity. A citizens group is providing ideas for boosting the economy.

Soehner told Kirkpatrick about a 400 percent insurance cost increase on private property on the Winslow Flood Plain. Tess Kenna said the I-40 interstate through Winslow was poorly landscaped in comparison to other roads in Arizona. The group also mentioned the hazardous bottleneck at I-40 and Transcon Lane.