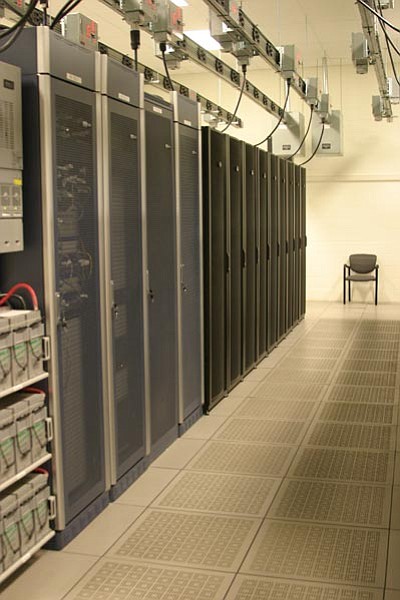 FORT DEFIANCE, Ariz. - After opening a new high-tech data center, the Navajo Nation is one step closer to bringing wireless internet to people across the vast Navajo reservation.

The Navajo Tribal Utility Authority (NTUA) received a $32.2 million grant through the American Recovery and Reinvestment Act (ARRA) for a major broadband initiative to build fiber optic network communications and microwave infrastructure throughout the central core of the Navajo Nation. The nation has completed the 570-mile build out for the broadband project. The overall budget is $46 million and officials expect the project to be complete later in the fall.

NTUA General Manager Walter Haase said in the application for the money his agency pointed out that the Navajo Nation, like most rural areas, faced considerable challenges in telecommunication services. He hopes that with the opening of the data center, the Navajo Nation has set the stage to enable information and communication flow throughout the region.

"This is a huge leap forward for the Navajo Nation and surrounding communities," Haase said. "We will be competing with the rest of the country in terms of telecommunications business, not to mention having such a high level of technological accessibility helps to improve the economic development, education, employment, health and safety of the Navajo Nation and its people."

The data center is basically a high-tech warehouse that businesses, companies, tribal programs and various agencies can use when they need a data center solution.

The data center will provide secure, uninterrupted operation of applications and servers to support almost any situation. The backbone of the broadband runs from Farmington, N.M. to Window Rock, Chinle and to Coalmine Mesa.

The three tier site is a secure facility that relies on card keys and bio metrics for staff access, with 30-inch raised floors and security cameras. One uplink runs through a fiber backbone to Albuquerque, with officials negotiating another pathway through Gallup creating redundancy. The building has two power feeds and one Cummings generator with storage batteries on site.

Haase said 70 percent of the workforce at the new facility is Navajo.

Navajo Nation President Ben Shelly said the day marked a celebration of the first data center of many to come.

"We are a technology nation, just as much as we are an energy nation," Shelly said. "With the cloud, we are inviting companies, corporations, large groups across America to store their data here on the Navajo Nation. It's a smart move."

Senatorial and Congressional office staff were also on hand at the data center opening.

The Navajo Nation, led by Shelly in Washington D.C. during the ARRA period, received more than $500 million for infrastructure projects.