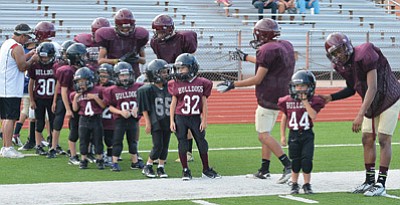 WINSLOW, Ariz. - Winslow School District football coaches and older players mentored younger athletes during Winslow's Football Frenzy Aug. 16. In reality there was no frenzy, just structured drills for all ages with high school players providing very little resistance to the aggressive kindergartners. High school players fell all over themselves trying to be the most inept and clumsy of opponents.

The event is a celebration of football season, a gathering of Winslow parents and a redefinition of what football is. Winslow's Frenzy is a local statement, affirming the wholesome values inherent in sports.

Winslow High School football coach B.J. Little and five-time Coach Hall of Famer Emil Nasser had a discussion about various football secrets to success on the sidelines during the Frenzy. Little said Winslow's team will be competitive on the field this year.

"We have many players returning from last year which provides us with experience and the summer weight training program was very productive," he said.