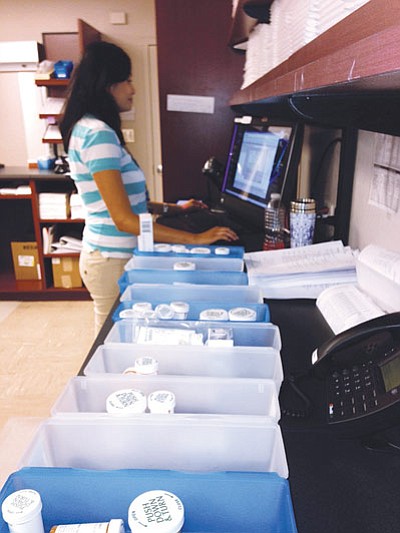 The LeChee Pharmacy sends out about 2,000 prescriptions by mail each week. Submitted photo

LECHEE, Ariz. - LeChee Pharmacy opened in April for outside prescriptions and with its mail order service, which opened in November, the pharmacy is saving a large population in the northern part of the state time and money.

Clint McCormick, assistant director of the pharmacy, said one of the main reasons for opening the pharmacy was to serve a population who otherwise would have more than an hour drive one way to get prescriptions filled.

"There is quite a large population of people up here who stand to benefit from having a closer facility," McCormick said.

The majority of the pharmacy's work is mail order but the outside prescription numbers are increasing as more people start to realize they are open for business.

The main areas the pharmacy serves are LeChee, Page, Crownpoint, Coppermine, and Kaibeto. McCormick says that anyone who travels through the area on a regular basis can use the pharmacy.

"We have people who live in Utah but they travel through here enough that they utilize our services," McCormick said.

He added that anyone who uses the Tuba system can use the mail order service. People in Flagstaff to New Mexico can use the system.

"If doctors in Page write prescriptions, their patients can actually come here to get them filled and get their refills here and not have to pay those copays here for their prescriptions," McCormick said. "It really saves them a lot of funds."

McCormick said now that the pharmacy is open, what could normally be an all day excursion to get medicine has been significantly reduced, especially if the person is in the system already.

"They call us, we get it [their prescription] ready," McCormick said. "Pretty much everybody that comes in, nobody has to wait for more than 15 minutes, it's usually 15 minutes or less."

McCormick emphasized that the pharmacy can take prescriptions from any doctors and that it can and will sign people up for mail order where the prescription can be mailed right to a post office box. In the future the pharmacy will be set up to give vaccinations for flu and other sorts of things.

Right now, mail order is about 90 percent of the pharmacy's business. The pharmacy sends around 2,000 prescriptions out by mail every week.

The pharmacy employs three pharmacists, four technicians, a billing specialist and a benefits coordinator specialist. Two people on the staff speak Navajo fluently and a couple of others are able to converse though they are not fluent. McCormick said that most of the people who work at the pharmacy are either Navajo or are familiar with the community they are serving.

"We have great staff, phenonomal staff," McCormick said. "We stay busy but we want people to come in and we are ready to serve as many people as possible."

The pharmacy is open Monday through Friday from 8 a.m. to 7 p.m. (DST) and closed on weekends.