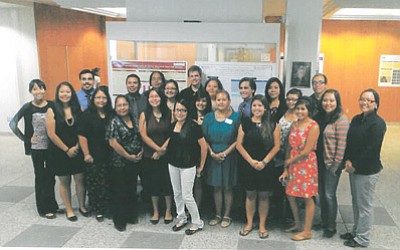 Most of the students are participating in a Native American Cancer Prevention program. But there were also students participating from a program called Bridges to Baucalaurette, which the National Institute of Health sponsors and from a National Science Foundation program focused on providing research experiences for undergraduates in environmental science.

The students in the Native American Cancer prevention program are focused on answering the question 'why does one population seem to suffer more from cancer than another?' In this case, the students are looking at Native American populations. Once the students answer that question, they look for ways to prevent it from happening. The program's goal is to work with Native American communities, and many of the student projects deal with an issue that is present on the Navajo or Hopi reservations.

"We're really trying to grow that interaction between what the communities are interested in in terms of the questions they have and how students could address those," said Jani Ingram, associate professor of chemistry at NAU. "These are all tribal students working on some of these tribal issues."

Some research has shown that the mortality rates of cancers are higher among Native Americans than the general population.

"I would say that the risks of obesity and diabetes, that kind of stuff feeds into it," Ingram said.

Margaret Briehl, professor of pathology from University of Arizona said that the difference can be cancer specific and that some cancers don't show any differences between natives and non-natives, but that some do.

"Kidney cancer is one that does appear to be higher in Native Americans in the Southwest, we don't understand why," Briehl said.

The program has expanded from its start and has added programs like the Discover program, which has a mix of NAU students and U of A students who went to rural health clinics and learned about different things that were happening in those specific communities. Students have been to Nogales, Mexico and up to the Hopi hospital looking at public health. The students develop research projects based on what they see and learn.

The program also encourages tribal colleges and community college students to earn their bachelor's degree, at NAU or somewhere else, with the hope of encouraging student research that will help them in the future.

"It was a specific intention to grow the program," Briehl said. "We started the students at one age and what we're trying to do is get what we call a pipleline, so starting at the community college, maybe even get them in high school... we want to keep them engaged."

Ingram said the goal is not to push students in a direction but to give them a bigger view once they finish with tribal college or community college and give them a chance to explore and try out different fields before finding what they want to do.

"It gives them the connection but it also gives them the application of some of the coursework types of things and so it does a lot of different things," Ingram said.

It took the students about 10 weeks of research time to put together the poster boards they presented - the culmination of their summer work.

Briehl said one of the important parts of the project is to give the non-native mentors a real understanding of where the students are coming from and what their history is. On July 28, the program brought some mentors from Tucson to Hopi to show cultural differences.

"That was one of the reasons to go out to Hopi, just because they had never been on a reservation," Briehl said. "I think it is kind of nice to see a two-way street."

"The students teach the mentors a lot," Ingram added. "I think that's a lot of the reason the faculty get involved because they are very interested and they learn just as much from their students."

Winifred Tsosie, who is half Navajo and half Apache, is a junior biology student from Springerville, Ariz. She said she wanted to get involved because she wans to go into oncology and find a way to incorporate that at the Indian Health Service. She explained that her interest is motivated by a personal experience with kidney cancer and how her cancer affected everyone in her extended family. That experience made a difference in how she thinks about cancer and different ways she can help her people better understand how to handle it in the future.

"I feel like I have to give back to my people," Tsosie said. "I know what it's like to have cancer, I've been through it. I know how my mom was really traditional and working with western medicine, some things just didn't click and I would like to find a way to incorporate that."

Tsosie said that she feels that there is a way to bridge the gap between traditional Native American ways and scientific research and she wants to be a part of that.

"I think there is a way," Tsosie said. "Nowadays, they are trying to find a way to work with diabetes and how to incorporate that into the Navajo traditions, I believe there's a way."

Her mentor, Ronald Heimark, who was already working on prostrate cancer research on Native American men, has taught her everything she knows about research. She said that he helped her figure out how to do the testing required and then they sat down and came up with a hypothesis for her project.

"I was able to actually work on my project," Tsosie said. "It feels really good to know what I am talking about now."