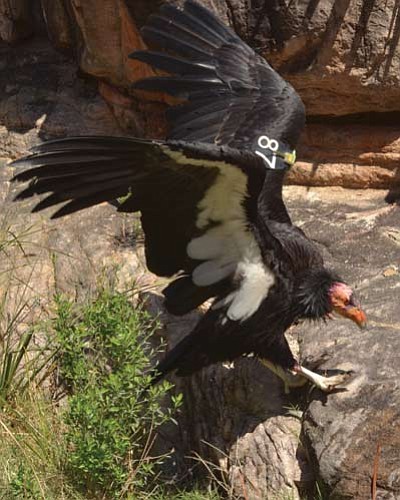 Condor #87 gets wet in Pipe Creek along the Tonto Trail in Grand Canyon National Park. Photo/NPS

The Tucson-based Center for Biological Diversity renewed its call for a ban on lead ammunition in that area when it announced recently that seven of the 80 California condors in Arizona and Utah have died since last December. Lead poisoning has been confirmed as the cause of death for three of the seven, it said.

"Lead poisoning is completely preventable if we start treating toxic ammunition the same way we treated lead paint and lead in gasoline before and just get rid of it," Miller said. "It's past time to admit that the voluntary program isn't working and it's time to require non-toxic rounds."

Chris Parish, director of the condor program for the Peregrine Fund, which aids Game and Fish with the reintroduction effort, said the voluntary program has made strides in keeping lead out of the condor's range.

"Have we solved the problem? Absolutely not. Is lead still the leading problem? You bet," he said. "But it's a long road and it takes time to change, and I think that's pretty reasonable."

Parish said that 85 of the 149 condors reintroduced in Arizona and Utah since 1996 have died or disappeared. He also said that lead poisoning was the confirmed cause of death in 26 cases and suspected in many more.

The Center for Biological Diversity's news release said lead poisoning was the cause of death in 38 of 81 condor deaths or disappearances.

Condors are obligate scavengers, which means the carcasses and gut piles hunters leave behind are a primary source of food.

According to Lynda Lambert, a Game and Fish public information officer, lead contained in the remains is enough to poison condors scavenging for food.

"Lead fragments into hundreds of pieces far from the wound channel," she said. "The hunter may not even realize how much lead is left in that gut pile they leave behind."

The voluntary program educates about the dangers lead ammunition poses to wildlife and gives out free copper rounds. Hunters using lead ammunition are asked to clean up their gut piles when they're done, while those using non-toxic rounds are encouraged to leave the remains behind as

food for the condors.

The program began in 2005 as an education and outreach effort. Between 80 to 90 percent of hunters have taken part over the past five years, according to Game and Fish.

"A voluntary effort is generally more accepted than a mandate," Lambert said. "We feel like we have a tremendously successful program in Arizona and although it takes time, once people get used to it and are educated it becomes second-nature to them."

Sandy Bahr, director of the Sierra Club's Grand Canyon chapter, acknowledged that the program has raised awareness on alternatives to lead ammunition but said there are still too many hunters using rounds that are toxic to condors.

"There have been some efforts from Game and Fish that have convinced people to switch to alternative ammo," she said. "But the bottom line is it doesn't take very many hunters using lead to cause problems for the condors and other animals."

The U.S. Fish and Wildlife Service banned the use of lead shot for hunting waterfowl in 1991 because the pellets poisoned birds that feed off the bottoms of streams and lakes.

Environmentalists cite California's 2007 lead ammunition ban for hunters in the condors' range as an example of what Arizona should implement. But Parish of the Peregrine Fund said that lead poisoning still causes roughly 50 percent of condor deaths in the area extending from San Jose to Los Angeles. The percentage of deaths that lead poisoning causes in Arizona is currently 50 percent as well, he said.

"After talking to the hunters and educating them, when you ask if they would take the risk of poisoning a condor by using lead, the answer is almost always no," he said. "A ban would reduce the amount of lead out there, but would it raise the same awareness? I'm not convinced."