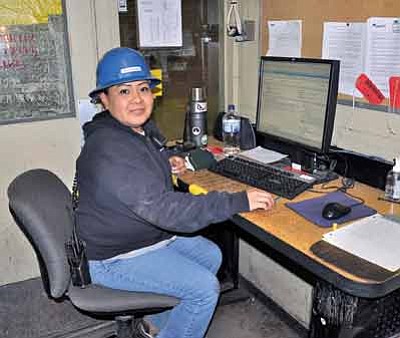 LECHEE, Ariz. - Christine Bigman took a chance. When she graduated from Many Farms High School, she wanted to see the world, have an adventure, and accomplish something.

So like hundreds of other young Navajos, she joined the U.S. Army.

"That's when I decided that I was going to go out on my own and make something of myself," the Rough Rock native said. "I wanted to go out there, I wanted to see something, do something different. Yes, it was risky but I did it anyways."

For nearly 13 years, the Army sent her to places like South Korea, Germany and Iraq. When she left the military as a sergeant in 2007, she was eager to return to Navajoland to be closer to her family.

Like many Navajo veterans, Bigman discovered that finding work on the Navajo Nation can be difficult and discouraging. She moved to Kaibeto where her dad lives hoping to improve her chances.

At first, the only job she could find was as a receptionist at the Tuba City Regional Health Care Corp. dental clinic. The 93-mile round trip commute, however, was unappealing.

Her father suggested she apply at the Navajo Generating Station (NGS). Because of her military experience, NGS hired her as a security guard.

After six months, NGS officials encouraged her to apply to NGS's Power Plant Fundamentals School, even though she had no experience in mechanics, engineering or anything else in the energy industry.

The seven-week-long school is required for new employees. It's an intensive, competitive program that some equate to a 21-credit college course with 10 hours a day of classroom lecture and fieldwork followed by at least two hours per night of study group.

The curriculum includes sections on virtually every aspect of the power plant's parts, equipment, procedures and operations, from electron theory to the railroad that delivers coal;,from physics to the history of the Federal Reclamation Act of 1902; and why NGS is located where it is.

Bigman successfully completed the class and has excelled throughout the extensive training she has received since then.

"When I applied here and I got more information about what it's really about, it was so interesting to me," she said. "This job is just wonderful. I never thought I would love doing this job."

Bigman says she has learned a lot about a field that she had no knowledge of and never thought she would work in.

Today, after five years of training and experience, Bigman is an O&M3, considered one of the most important jobs in the power plant's Operations Department.

"They're the eyes and ears, the hands-on in the field," said Terry Edwards, an NGS operations supervisor and trainer. "They're responsible for everything from our condensate pumps, to our coal pulverizers, our boiler fans, all the systems and sub-systems, both mechanical and electrical, involving the generation of electricity, the necessary equipment that's required to make the plant run.

He said O&M3s have the most broad and most lengthy job description of any of the operations staff at the plant, with more territory to cover than other positions.

For instance, when an operator in one of NGS's three control rooms notices one of thousands of potential changes happening anywhere in the power block, it is an O&M3 like Bigman who checks it out, he said.

"Being in operations is really demanding," Bigman said. "You have to be really responsible. It's a big job. We have a big area to watch. It's not just one set job. We look at everything, the whole picture as far as operation of everything. That's another thing that I like."

Bigman said family and friends have asked her how she got her job. Although she didn't know anything about power plants before she started, she took the entry exam, passed on her first try, and then studied hard in all of her training classes, she said.

"I do tell them how I got in, that it's Navajo preference," she said. "I think anybody has the opportunity to get in if they're focused, you know, committed, motivated. I think they can get in if you're willing enough and determined enough."

Bigman said she appreciates being able to work at a challenging job close to home after being away in the military for so long.

"Coming back to work with more of my people is comforting," she said. "It's good to work with people that you have familiar traditions with. As far as the Navajo people working here, I would say almost 100 percent love working here. That's why they stay here so long."