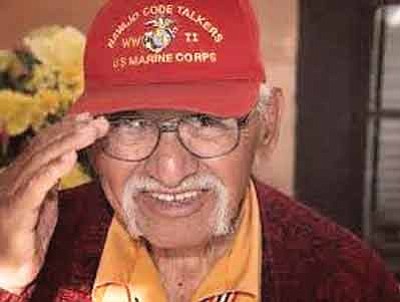 "Vice President Rex Lee Jim, First Lady Martha Shelly and myself offer our prayers and condolences to the family of Code Talker Smith. His legacy of being a Code Talker will be remembered for generations to come. The Navajo Nation mourns the loss of one of our modern day heroes and warriors," Shelly said.

Smith was born Dec. 13, 1924. He was Salt People Clan and born for Black Streak Wood People. Smith served in the 4th Marine Division Battalion, 23rd regiment during World War II and served in Saipan, Tinian, Iwo Jima and the Marshall Islands. He began his service as a Code Talker in 1942.

"I think about our Code Talkers and their deeds, it makes me proud to know that these young Navajo men helped defeat the Japanese. Code Talker Smith was among those young men who used our language to defeat the enemy. They came home without being able to tell us of their deeds. We recognize them today and their heroic deeds," Shelly said.

Smith also served as an advisor to the movie "Windtalkers," which depicted the inception and service of the Navajo Code Talkers.

In 2001, he was honored with the Congressional Medal of Honor for his service during World War II. Smith also was an honored guest in New York's Fifth Avenue Veteran's Day Parade last November.

"Code Talker Smith will be remembered as a educator, warrior and a hero among our Navajo people," President Shelly said.