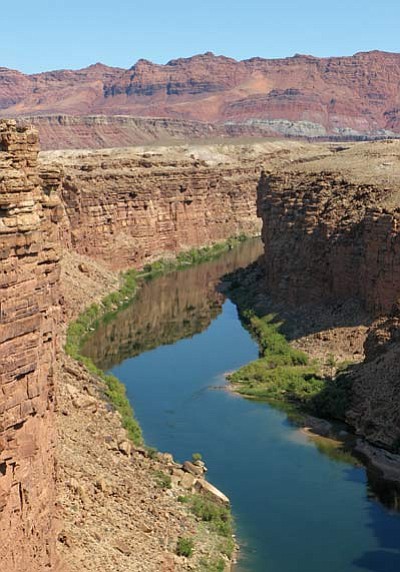 WASHINGTON - A new ranking lists the Colorado River as the most-endangered river in the country, as increased demands on its water supply have put the river "at a breaking point."

The annual ranking by American Rivers lists the 10 rivers most threatened by pollution, development and demands for water that could cause the rivers to run dry.

That last threat was behind the No. 1 listing for the Colorado River, where studies that show demand for water from a growing population will eventually surpass the basin's supply. It is the third time the Colorado River has topped the list, and the seventh time it has been included, since the annual report first appeared in 1984.

"The basin is really kind of at a breaking point," said Amy Kober, an American Rivers spokeswoman. "This year, we need to get everyone together and put the basin on a path to better water sustainability."

Arizona water officials conceded that the river is under stress and said the state is working toward more alternative methods of water management, including desalination and recycling water.

For now, however, the state has an "aggressive" water conservation system to prepare for the possibility of future shortages, said Thomas Buschatzke, assistant director for the Arizona Department of Water Resources.

"We knew this was an issue with the Colorado River," Buschatzke said. "We've been working on a solution for a couple decades."

A report done by the agency with data from the seven basin states, including Arizona, predicted that annual demand for Colorado River water by 2060 would be 3.2 million acre feet more than the river is able to sustainably provide. Climate change could also reduce the river's flow from 10 to 15 percent, said the report, which was released in December.

"The Colorado has been facing chronic water problems for years," Kober said. "We need Congress to step up and fund some critical conservation and efficiency programs to conserve water and improve sustainability."

Buschatzke said Arizona has about 9 million acre feet of water stored in case of extreme drought.

"It doesn't keep water in the river, but it perhaps delays the day in which you might need to go to the river to get more water," he said.

"On the efficiency side, I think we've done a good job," he said.

Protect the Flows coordinator Molly Mugglestone, whose organization represents more than 800 businesses in the Colorado basin, said communities do a good job of conserving Colorado River, but that efficient use needs to be the top priority.

"People are willing and wanting to better use their water," Mugglestone said. "We think that needs to be done more."

The way Arizona currently manages the water is old-fashioned and has not changed much since the 19th century, she said. The method that uses dams and pipes water out of the river is not progressive enough to address the imbalances reported by the Bureau of Reclamation, she said.

"There's just not going to be enough water," Mugglestone said. "We rely on this for our livelihoods in the West."