Slice of life: Winslow Chamber of Commerce Director Bob Hall
The Navajo-Hopi Observer asks what makes up a typical day 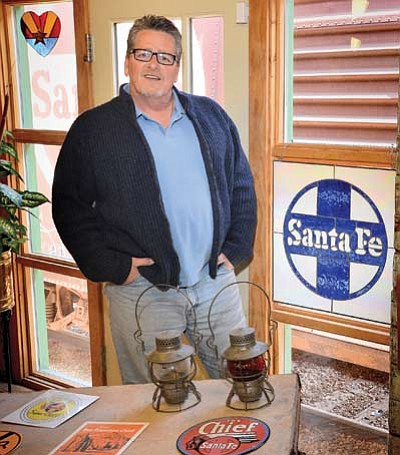 How many years have you lived in Winslow?

Where did you live before Winslow?

How long have you worked for the Winslow Chamber of Commerce?

There are two of us here (Angela Gonzales) and sometimes we feel like one armed wall paper hangers. We are the Chamber of Commerce and the Winslow Visitor Center as well. It depends on if there are events going on and some times of the year are way crazier than others. A lot of correspondence and at the same time taking care of guests coming through the door. A lot of work being done promoting Winslow and there's events taking place and we're out helping set up and run them. A lot of after hours.

What's the best part of your job?

You know what, I have to say, simply getting to meet new people. Whether it has to do with Chamber of Commerce stuff or if it's just these tourists coming through the door on vacation from around the world, they are coming in here and we talk to them, and answer their questions. And that's my favorite part, it really is my favorite part. Another favorite part is working to help local businesses be successful.

What's the worst part of your job?

Would be... the hours. you know there have been times where I don't get a day off and last summer there was a period of time where I didn't get a day off, including Sunday, for six weeks. Every day for six weeks there was something I had to do. I will admit, one of my "issues" is not delegating more. If the Chamber is hosting an event, I want to do everything. But, I'm slowly getting better at not doing everything. Recently we had our annual installation mixer and I let go and Angela and a couple other people took over the set-up allowing me to focus more on the presentations and schedule.

What's the most memorable experience of your job?

I would have to say it was moving into this building and being the keepers of it. The building itself is a very significant part of Winslow's history and it's quite an honor to be in this building (Lorenzo Hubbell Winslow Trading Post). And I was quite involved with the five year restoration process.