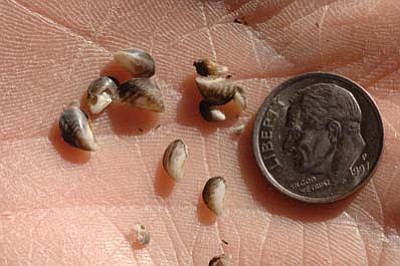 LAKE POWELL, Ariz. - The discovery of 14 adult quagga mussels at a Lake Powell marina last month doesn't suggest that the invasive species will become established there like other Colorado River lakes, officials said.

However, it's another reason why the Arizona Game and Fish Department is ramping up its "Don't Move A Mussel" campaign. The effort encourages boaters to clean, drain and dry their vessels in order to stop the spread of mussels.

Mark Anderson, an aquatic ecologist at the National Park Service (NPS), said the Lake Powell mussels were too far away from each other to reproduce. They were found at Wahweap Marina and removed.

Quagga mussels can reproduce rapidly and build large colonies that clog water intakes and slow down water delivery. From Eastern Europe, the quagga is cousins with the zebra mussel, which has wreaked havoc in the Great Lakes region.

Quagga mussels are also known for their destruction to ecosystems as voracious eaters that feed on phytoplankton and strain the bottom of the food chain.

They were first found in Arizona in Lake Mead in 2007 and then in Lake Mohave. From there, the mussels got into the Central Arizona Project (CAP) aqueduct and reached Lake Pleasant and the confluence of the CAP and Salt River Project (SRP) canal systems.

Anderson said the Glen Canyon National Recreation Area, which includes Lake Powell, uses early detection methods to look for quagga larvae. Last fall, 14 larvae were found out of 150 water samples. The lake is nowhere near the level of infestation that Lake Mead has, he said.

"We're in a different scenario here because we've had so much effort in our monitoring," Anderson said.

NPS uses divers, a remotely operated submarine, substrates and water sampling to routinely check for mussels. Anderson said he expects they will find more mussels in the marina but is hopeful that they will also be too scattered to reproduce.

Tom McMahon, invasive species program coordinator at the Game and Fish Department, said the small number of mussels found at Lake Powell isn't cause for drastic measures but can't be ignored.

"We're not as a state, and even the Glen Canyon National Recreation Area, going to quarantine every boat that leaves," McMahon said. "We're certainly going to heighten help to people leaving. It's bad enough to find adult mussels, but it's not a full-blown infestation."

McMahon said divers checking for mussels will continue to monitor the water, much like SRP does with monthly water samples.

Lesly Swanson, senior environmental scientist at SRP, said the utility's dams, reservoirs and canals could be harmed if the mussels get into it.

"We're concerned about all of our reservoirs getting affected with mussels," Swanson said. "They're trying to reach as many people as they can to let them know their reservoirs don't have mussels."

Bob Barrett, spokesman for CAP, said the mussels aren't a major problem despite getting into the system several years ago.

"Overall, they're not that big of an impact with us," Barrett said. "They're mostly a maintenance issue, and when they begin to clog any of the waterways we just go down and scrape them."