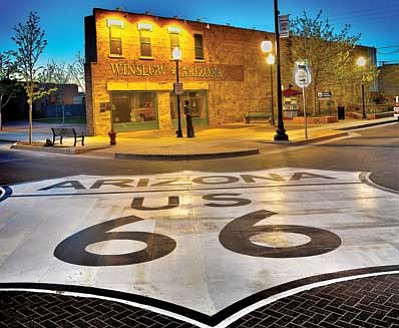 WINSLOW, Ariz. - Take it easy this Friday and Saturday in Winslow with the 14th annual Standin' on the Corner Park Festival featuring two full days of music, food, drinks, a mayoral speech, a live auction and a plethora of other entertainment and activities for event-goers of all ages.

The festival will be held in downtown Winslow on Historic Route 66 (West Second Street) and North Campbell Avenue at the Eagle Pavilion located at 523 West Second Street behind the historic Hubble Trading Post.

This year's schedule of events includes headliners the Sheagles, an all female Eagles tribute band, as well as outlaw country and southern rock band A Boy Named Sioux. The Sheagles hit the stage Saturday night at 8 p.m. followed by festival closers A Boy Named Sioux at 10 p.m.

The festival opens at 10 a.m. on Friday with a trio of acoustic artists, Nat Larson performing acoustic originals at 10 a.m., followed by Brooke Boehner at 10:45 a.m. with some acoustic covers, and then Kent and Cameron at 11:30 a.m. on acoustic guitars.

At noon catch local favorites Greg Hackler and Casey Gilliam and their band Better Than Nothin! For 1970s rock lovers be sure to see Mantis at 1 p.m., followed by country and western tunes by the Dusty Roads Band at 4 p.m. and the Tommy Dukes Blues Band at 7 p.m. The closing act for Friday night is rock and roll band The Visitors taking the stage at 10 p.m.

Dr. Greg Hackler, a member of the Standing on the Corner Foundation and band member of Better Than Nothin!, talked about how the event got started.

"The first Standin' on the Corner Festival was Sept. 11, 1999 and we had the festival only because we were opening the park, it was an unveiling of our statue and the mural," said Hackler. "When that happened we had a few vendors there, some volunteer help, and a few bands that volunteered to help, so it was just a nice little downtown gathering. Everybody enjoyed it so much we decided to continue to have it the next year."

The well-known single "Take It Easy," written by Glenn Frey and Jackson Browne, became a hit in the 1970s for the Eagles and put the community of Winslow on the map. The verse "standin' on a corner in Winslow, Arizona" draws visitors from far and wide to stand on that famous corner on Historic Route 66.

The second day of this year's festival starts at 9 a.m. with a speech from Winslow Mayor Robin Boyd and also kicks off with the Winslow Stars National Dance Team. The event will feature plenty of food, arts and crafts, clothing, a kids corner and other vendors will be available.

Other acts on Saturday include more acoustic originals, this time by Morgan Desaulnier, as well as entertainment by a magician/ventriloquist at 10 a.m. At 11 a.m. don't miss Mexican folk dancers NPC Ballet Folklorico, followed by some classic rock at noon from Rick Morales' band Driven, and gospel music at 2 p.m. performed by Sounds of Faith.

Everyone is then welcome to partake in the Standin' on the Corner Auction at 4 p.m. featuring a multitude of fantastic items to bid on. A professional auctioneer will be on hand to auction off all of the goods.

"We're going to auction off a signed Eagles guitar, a custom metal fire pit with Winslow motif, a homemade quilt featuring the Arizona centennial, a mountain bike, Ron Pelton photographs, electronics, a flat screen TV, and a DVD player among many other items," said Hackler, adding that all the members of the Eagles signed the guitar. "We didn't have one last year or the year before but we're glad we're able to have one this year."

After Saturday's auction the party resumes at 6 p.m. with Mexican music from Northern Latino Express. The Sheagles then finally rock the pavilion at 8 p.m. followed by A Boy Named Sioux at 10 p.m. Last call is at 1 a.m.

New this year however will be a $2 cover charge per person per day, children under 10 are free. Hackler spoke about why they decided to begin charging for what used to be a free event.

"The $2 charge is because we're trying to raise money to continue to build the Eagle Pavilion," Hackler said. "It has to do with building our double stage, a permanent stage, that can be used by the entire community. That's what we're building that event area for behind the Hubble building."

According to Hackler, they have already made some great improvements in the two years since they announced the construction of the Eagle Pavilion, but still have more work to do in order to reach their goal of one day having a professional quality stage that can attract larger music acts, performers, and entertainers.

"The year before last we were able to put three nice grassy knolls in there, we improved the grounds, we have a dance floor in there now, and we do have handicapped accessible sidewalks," he said. "So those are some of the improvements we've made so far but our big push right now is for the double stage that will be professional quality."

The two-story mural by Pugh and the statue by Adamson depict a 1970s-era man standing on the corner wearing jeans, boots, a shirt and a vest with a guitar standing on the toe of his boot, giving life to the lyrics "well I'm standin' on a corner in Winslow, Arizona, such a fine sight to see."

A unique facet of the park includes inscribed bricks sold by the Standin' on the Corner Committee, allowing purchasers to have a permanent spot on the corner in Winslow, Arizona. The sales of these bricks have made the building and upkeep of this park possible. People are encouraged to purchase a brick, a mural print, a mini bronze sculpture or other Standin' on the Corner Park memorabilia and merchandise.

For more information on the festival, the park, or for a full list of all this weekend's performances and activities visit standinonthecorner.com or www.winslowarizona.org.