Only Native raised and owned livestock will be used in Indian National Finals Rodeo
Event will be held Nov. 6-12 in Las Vegas 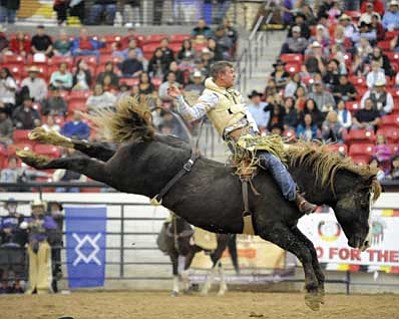 LAS VEGAS - For Indian ranches raising Indian livestock to be used in an all-Indian rodeo, it doesn't get much more authentic than the upcoming Indian National Finals Rodeo (INFR) Nov. 6-10, at South Point Equestrian Center in Las Vegas, Nev.

Staying true to its 37-year tradition, INFR - the biggest and longest-running rodeo organization in the world - not only imports its Native American cowboys from around the country, sponsors also bring in Native-raised-and-reared livestock.

"Even though it's more expensive to have all Indian-owned stock, we made a commitment to showcase rough stock from around Indian Country brought here by Indian-owned contractors," said INFR's Perse Hooper.

"We're an all-Indian rodeo from our cowboys to our critters," said INFR general manager Donna Hoyt.

Last year the rides - and the ridden - came from some 40 ranches in Montana, South Dakota, Arizona, Wyoming, New Mexico, Florida and Alberta, Canada, all ending up at the Equestrian Center, home turf for the annual INFR gathering of broncs, bares, and bulls.

Pro Rodeo Hall of Famer Bennie Beutler, although a non-Native, is a third generation stock contractor from Oklahoma whose family has been part of professional rodeo for decades. Beutler bulldogged a bit before he figured out he'd starve to death trying to earn prize money. He now quotes his grandpa about being on the purse side of the table where, if you're rodeoing you might get a check every month, but if you're a stock contractor, checks arrive every week.

One of the longer-standing INFR Native stock providers is Kenny Young of K/L Bucking Bulls in Page, Ariz.

"INFR competition is a prestigious event we look forward to every year," said Young's daughter, Michelle McCabe. "Our annual goal is to provide a special pen of stock that adds to the caliber of desired performance, challenging riders to do their best and giving them a chance at a winning score," said McCabe. "We want to bring bulls that, if ridden successfully, will provide a high score for the rider. Although K/L Bucking Bulls have been responsible for some 'no qualified' rides, they also have improved the riding ability of some of the top riders who have the heart to try them."

"It's a balancing act. We look at degree of difficulty and a bull's bucking style because we want bulls that provide high scores," she said. "When the team of rider, bull, and livestock supplier click, it's a job well done and we like being a part of the experience that helps make champions."

From South Dakota's Oglala Sioux country comes Chancy Wilson's family-oriented Native American stock provider, Wilson Rodeo, a regular on the draw list at INFR. According to the South Dakota Rodeo Association, C.H. Wilson was a supplier of famous bucking horses as early as 1919.

For 17-year-old Navajo Moka Francis, this will be the first time he and his parents, who operate D&M Bucking Bulls and Horses of Dilcon, Ariz., have provided stock for INFR.

"We'll be bringing 10 bulls," he said. "I love to watch my young bulls we raised come up the ranks."

One drawback to this business arrangement?

"I can't drive the bulls to rodeos because I'm still underage and don't have my driver's license," he said.

Steve Stallworth, Equestrian Center General Manager, says the annual arrival of cowboys, livestock, and fans associated with INFR is always a high point - "It's great competition with great athletes and great livestock - and fan participation is second to none."