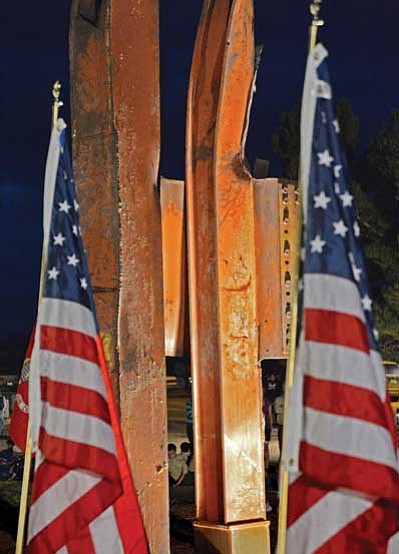 Columns from the destruction of the World Trade Center in 2001 are on display at a new park in Winslow. The community of Winslow gathered on Sept. 11 in remembrance of 9-11.

WINSLOW, Ariz. - Sept. 11, 2012 was the 11th year after the World Trade Center Towers were destroyed in New York. It was the 10th year Winslow held a Remembrance Memorial Service for 9-11 and also the10th anniversary of Winslow's acquiring of the 9-11 iconic columns.

There were about 300 people in attendance. Joseph City Fire Department attended as well as Winslow Fire Department, Winslow Police, EMS Ambulance Service, Navajo County Sheriff and officers and a Navajo County supervisor. Beforehand the participants had an enchilada dinner at Falcon Restaurant where the kids scarfed down hot dogs. It was a solemn ceremony but the people who gathered here for it enjoyed the interactions and fellowship.

Thanks to all who gave their time, for participating and making this 9-11Memorial Service successful. Additional thanks to Lani White, Dee Rodriguez, Chief Garnett, Chief Hernandez, Bill Herron, Mike McGee and Dr. Peters for planning and execution of this annual service.