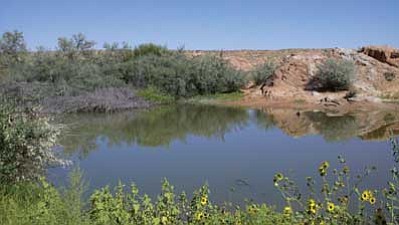 Officials from both tribes who assessed the water damage said that many of the roadways in Tuba City were covered with water as high as eight inches to one foot, making local driving hazardous.

Asphalt damage was so severe on one of the main road arteries of Highway 264 East, causing ADOT to shut it down for two days until their road crews could safely repair damage to allow traffic through. Highway 264 - which points east of Tuba City - is the only main roadway to the Hopi Reservation.

ADOT road crews and deputies from the Coconino County Sheriff's Office worked together along with both Navajo and Hopi tribal emergency crews to clean mud and debris over a three-day period. Emergency sandbags had to be utilized to keep areas that still contained collected water from flooding into residential or commercial areas.

The National Weather Service issued a "flood advisory" for the northern portion of Arizona, which included Tuba City, Moencopi, Cameron and the Timberline area of Flagstaff over the three-day period.

Though flooding was severe, no residents were displaced in either the Navajo or Hopi reservation areas.

Crop damage in the lower portion of the Hopi village of Lower Moencopi was visible from the roadways and areas of the upper village, these two Hopi villages are the only Hopi villages that utilize "irrigation" for their corn and bean fields. The overflow of rainwater will most likely cause so much mildew damage, that many of the fields will not be able to be salvaged.

As of Sept. 14, Highway 264 was fully re-opened and daily activity and public services as well as school activity were back to normal.