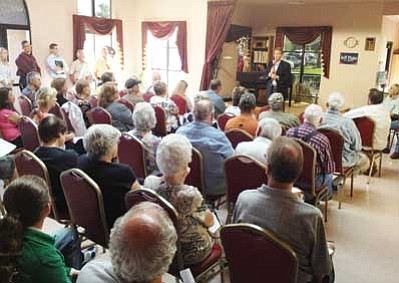 U.S. Rep. Jeff Flake met with 100 Page residents to express his concern that the federal Environmental Protection Agency is requiring state power plants to install expensive new pollution controls while overlooking recommendations by the State of Arizona as required by law. Navajo Nation officials told him they want to see NGS remain open because they are concerned about Navajo jobs. <i>Photo/George Hardeen</i>

More than 100 people filled the Page Senior Center Sept. 5 to meet the six-term Republican congressman and to hear what may be in store for their small town.

By Sept. 20, the EPA is expected to announce its decision on pollution controls for the Navajo Generating Station that are intended to reduce regional haze.

"It affects not only us here in Page and the state, it's a lot more far-reaching," said Page Mayor Bill Diak. "Whether or not you agree with being green, that's not the issue. The fact is whatever the EPA does, they don't have another replacement. They don't have another switch to turn on when they shut that one off."

The EPA's Regional Haze Rule calls for the reduction of pollution from all sources to near background levels by the year 2064. The goal is to reduce nitrogen oxide emissions to improve regional visibility in Class I areas, such as national parks and wilderness areas.

The EPA has required some power plants to install technology called Selective Catalytic Reduction at a cost of more than $1 billion. Last year, however, NGS completed the voluntary installation of $46 million Low-NOx Burners that reduce the amount of nitrogen oxide it produces by 40 percent.

Navajo Generating Station's (NGS) six owners say they may be willing to add the more expensive controls if the EPA could allow them enough time to complete a five-to-six year federal environmental review process required by the Department of Interior. Without that, they say, they may have to close the plant.

After having been delayed since spring, the EPA's decision on NGS is just two weeks away, said Paul Ostapuk, NGS environmental and safety manager.

"We're going to learn a lot on Sept. 20," he said. "If that proposal comes out and it has reasonable opportunity and gives us time and flexibility, then we know that they've heard the message. If it's more Draconian and says a billion dollars in five years, then that's a clear signal they don't want the plant to operate."

That's what has Rep. Flake frustrated.

"There is a war on coal at the EPA. Let's call it for what it is," Rep. Flake said. "And they're going to use anything they can, it seems, to push forward that war on coal."

He said research demonstrates that power plants' contribution to the regional haze problem in the Grand Canyon is less than 5 percent. The rest is from other sources and from beyond the area.

"According to their own studies, they cannot guarantee that this SCR fix would improve visibility at all, that it wouldn't be perceptible to the naked eye," Flake said.

As a member of the House Appropriations Committee, he said he's found federal agencies do not have to be accountable to Congress because they've learned they will be funded at the end of the year through an omnibus bill because the Senate cannot pass a budget.

"The EPA is, in my view, in many of these instances, going against the laws that we passed," he said. "They simply are not taking into account the legislation from which they derive their powers, and gone far beyond it."

He said the pattern has been for the EPA to ignore the State Implementation Plan that it is supposed to consider, go right to environmental groups, and enter into negotiations with them.

"Then the only way for the State of Arizona to get involved is to file suit or become a party to one of the suits," he said.

The other irony, Flake said, is that NGS was built as a compromise with support of environmental groups to prevent two hydroelectric dams from being constructed in the Grand Canyon.

The Navajo Nation favors a phased-in approach to the Regional Haze Rule so as to not threaten about 900 Navajo jobs at NGS and the Kayenta Mine. In August, Navajo Nation President Ben Shelly reiterated his position that the EPA recognize NGS's Low-NOx Burners as sufficient.

"We want NGS to stay open," said Sherrick Roanhorse, chief of staff in President Shelly's office. "Our people from the LeChee area as well as the Shonto area depend on NGS for jobs. To us, to the Navajo Nation, to my boss President Ben Shelly, it's about jobs. It's about the economy. It's about sustaining our livelihood."

The closure of the Mohave Generating Station near Laughlin, Nev., in December 2005 closed the Black Mesa Mine, caused the loss of 250 Navajo jobs, and resulted in a $10 million reduction in coal royalty payments to the Navajo Nation.

The imminent shutdown of the Four Corners Power Plant's Units 1, 2, and 3 and the installation of SCR technology on Units 4 and 5 will result in the additional loss of up to $16 million dollars a year in revenue to the Navajo Nation starting in 2013.

"Should NGS shut down, it's going to put us in a worse situation," Roanhorse said.

Ostapuk said that when the Mohave Generating Station closed - ostensibly because it was causing haze in the Grand Canyon - it's sulfur dioxide, nitrogen oxide and particulate emissions went to zero. In the six years since then, however, two studies show little improvement.

Central Arizona Project representative Mitch Basefsky said one of the reasons NGS was built was to generate power to pump half a trillion gallons of Colorado River water per year 336 miles uphill to central and southern Arizona.

He said it is the largest single user of electricity in the state, and 95 percent of its power comes from NGS.

Some 41 percent of CAP's water is used for agriculture and 47 percent is dedicated to Native American use. CAP provides water to about 80 percent of the state's water users, including 45 percent of Phoenix's total water demand, and nearly 80 percent Tucson's water demand by 2020.

If NGS were to close, Basefsky said, CAP water users could see their costs double from $16 million per year to $30 million, putting many farmers out of business and causing an negative impact throughout Arizona's economy.

An Arizona State University study released this year found the state stands to lose approximately $18-to-$20 billion in gross state product and 3,400 jobs over the next 25 years should NGS close.

But if the EPA takes into account NGS's progress through the reduction of NOx emissions through its Low-Nox Burners, gives it time to complete the environmental review and renews its lease with the Navajo Nation, that could be prevented.

"The EPA has flexibility," Ostapuk said. "They have 50 years out to 2064 to try to reduce emissions in the region, and we're a piece of that, but a smaller fraction than you might believe. So we've asked the EPA to give us some time and flexibility. The (NGS) owners really care about being a good neighbor and doing the right things for the environment."