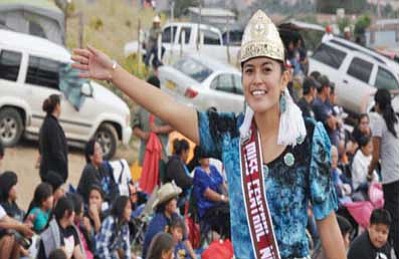 A beautiful Navajo queen waves to the crowd during the Navajo Nation Fair parade. Photo/Roberta John

WINDOW ROCK, Ariz. - You don't have to be an early bird to catch the Navajo Nation Fair parade.

They will get up way before the crack of dawn such as 3 a.m. Even if they have a rusty, old pickup that hasn't been driven for years, somehow they will manage to past every vehicle on the highway - all this, just so they can find a birds eye-view of the Navajo Nation Fair parade.

Fair if you've missed the grand daddy of all parades?

It's probably safe to say, this may be the only day when fairgoers will not be cited for speeding. This is all part of the nostalgia that encompasses the immaculate spirit of the Navajo Nation Fair. It's also a true testament of endurance and how the Navajo people embrace cultural Navajo pride.

In fact, many Navajo people even camp out along Arizona State Highway 264 to reserve a space and to get a good view of the many parade entries. Moreover, many parade enthusiasts don't mind roughing it out in a tent, waking up to a cold brisk morning, and listen to the hustle and bustle of honking horns.

However, there are also many people who are also not fortunate enough to attend the

If your cell phone can view www.ustreamtv.com you will be able to view it. If you have a laptop computer, you will need to have wireless access or landline connectivity to view the parade.

Skow added other tribal fair parades can also be recorded live if NNTV5 is willing to participate.