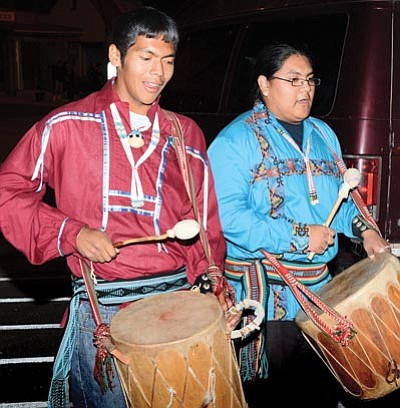 Dustin Key (left) and Troy Pavinyama provide drumming and Buffalo Song for participants in the walk to receive a proclamation from the city of Winslow naming Nov. 5 Winslow Native American Day. Todd Roth/NHO

The group began their walk at 7 p.m. carrying glow sticks for safety. The Winslow Police Department and Fire Department accompanied the group to City Hall.

The Proclamation reads as follows:

A PROCLAMATION OF THE MAYOR AND COUNCIL OF THE CITY OF WINSLOW, ARIZONA PROCLAIMING NOVEMBER S, 2012 AS WINSLOW NATIVE AMERICAN DAY

WHEREAS, the City of Winslow was originally founded in the midst of Indian Country and has been enriched and inspired by the magnificent traditions of our Native American friends and neighbors; and WHEREAS, the City of Winslow considers the preservation of Native American traditions and culture as one of the highest priorities for this community and for this entire region; and

WHEREAS, the Mayor and Council of the City of Winslow recognize and appreciate and commend the efforts of the Indian Education Parenting Committee and other organizations that support their Native American heritage; and WHEREAS, a Festival is scheduled for Monday, November 5, 2012 from 6:00 p.m. - 9:00 p.m. at the Winslow High School Student Union, which will include drum groups, dancers and food. The evening will also include the Winslow Miss Native American pageant.

NOW, THEREFORE, BE IT RESOLVED by the Mayor and Council of the City of Winslow that Monday, November 5, 2012, is hereby designated as Winslow Native American Day and the Mayor and City Council further urge all citizens and visitors of Winslow to attend and support the outstanding events planned for that day.