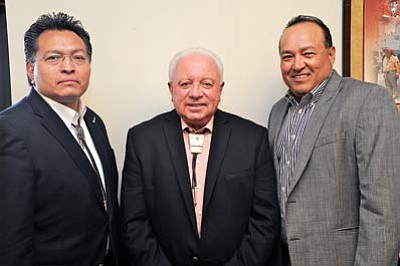 Winter, who has served as CEO since May 2007, will leave his position as CEO for the NNGE in order to concentrate his efforts on completing the development and opening of the Twin Arrows Navajo Casino Resort. The Board has asked him to remain and work on due diligence and planning for the Pinta Road Casino & Travel Center as well as other potential developments on behalf of the NNGE.

"I have had the privilege to work for an extraordinary board of directors, as well as with caring and committed Enterprise staff and casino employees during my time with NNGE," Winter said. "When I was confirmed as CEO in 2007, I advised members of the Council that it was my goal to mentor a Navajo for the CEO position and I wouldn't resign until I had found the right person. Having worked closely with Derrick during my tenure as CEO, I have total confidence in his ability to lead the NNGE and he is, without a doubt, the right person for the job."

Watchman said he looks forward to applying what he has learned as the NNGE continues to grow and strengthen it's partnership with the Navajo Nation.

"Of course, any good organization is only as good as its' employees and I happen to believe we have the finest and most dedicated employees around," he said. "Furthermore, I am very positive about NNGE's future and I am especially excited about the opening of our flagship property Twin Arrows - a unique destination that the Navajo Nation can be proud of."

NNGE Board Chair Quincy Natay said under Winter's leadership, NNGE provided thousands of Navajo people with jobs, competitive wages, and the ability to provide for their families.

"During Bob's tenure, he consistently advocated that the Navajo Nation has the talent within to make gaming profitabl," Natay said. "He created a strong management team. (Watchman's) commitment to the success of the Enterprise is evident and we have great confidence that he will continue making a difference in the lives of the Navajo people. We are excited about NNGE's future with Derrick as our CEO."