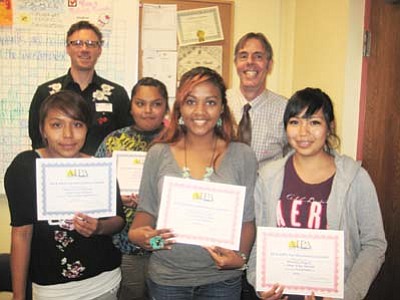 AIPA rates the state winners as superior, excellent or honorable mention. The entries were from last school year, but were announced in late September.

Stan Bindell, media advisor for Hopi High School, said he was proud of each of the award-winning students.

"It's great for the program and for our students," he said.

Unlike sports, there aren't any divisions, so Hopi High was up against all schools in the state from the biggest to the wealthiest.

Hopi High broadcast radio produces the Hopi High Teen Show, the only live remote Native American Teen Talk Show in the nation. Hopi High journalism produces the monthly Bruin Times. This past summer, Hopi High was selected as a PBS Student Lab Reporting Site and hopes to have its broadcast TV news program off the ground in the next month.

Shacely Miguel, a junior, took home an excellent for her commentary on The Bully movie.

"I was surprised. I didn't expect to win an award," she said. "I was happy because I was awarded along with my classmates."

Miguel said the award motivates her to continue in radio.

"I have learned a lot and it has helped me with my speech and interviews," she said.

Miguel said of all the people she told about her award, her cousin was the most excited as he encouraged her to keep up the good work and keep moving forward.

Christina Rucker, a senior, received an excellent for her news story titled "Jones named prom king." Rucker said she was happy to win the award.

"It means that I'm doing great with radio and I'm staying on task," she said. "This motivates me to do a lot more with radio."

Otivia Puhuhefvaya, a senior, won an honorable mention for her sports story titled "Wirth leads softball team." She said winning the award brought a smile to her face.

"It means that I can actually do something," she said. "It does motivate me to do more with radio. I want to take it to the next level."

Puhuhefvaya said her parents were surprised and happy.

Mary Grace Pewewardy, who is majoring in journalism at the University of Oklahoma (OU), earned an honorable mention for editorial page spread.

Pewewardy said she was amazed because she never expected to win another award, especially after she graduated. She barely remembered putting the page together.

"It stressed me out getting all the names and pictures to fit though," she said.

Pewewardy has been selected as the president of the Native American Journalists Association at OU. Her advice to high school journalists is to keep writing and, if it's a passion, keep studying journalism in college.

"It is hard work, but it really pays off," she said.

Lacey Tewanema, a junior, earned an honorable mention for her Valentine's Day feature story about how the Tenakhongvas became a couple. She said winning the award was surprising because she thought she would win an award for sports, but instead she won for feature writing.

"This means I can write news, features or sports," she said. "This allows me to know that I am a good writer and I can accomplish anything if I put my mind to it."

Tewanema previously won AIPA awards for news and sports. She said her mom thought it was cool and awesome that she can write that much and encouraged her to continue. Tewanema plans to major in journalism in college.

Hopi High School matches dollar for dollar any donations. It will cost about $1,200 per student to send each student. Students can be sponsored for $600 each.