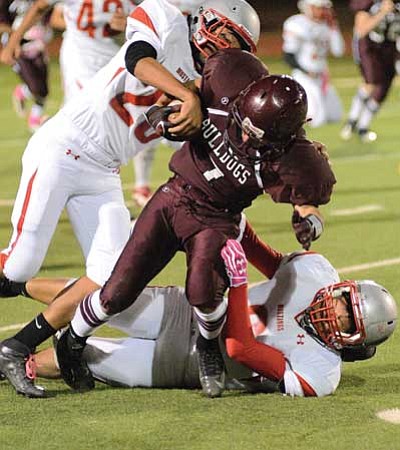 Henry Montiel drives for a first down during the Bulldog’s 62-28 win against Monument Valley Oct. 19. Photo/Todd Roth

WINSLOW, Ariz. - The Winslow Bulldogs put together an important 62-28 win over the Monument Valley Mustangs at Winslow Oct. 19. The victory improved Winslow's record to 6-3 for the season. Monument Valley suffered its first loss of the season and fell to 8-1 going into their final regular season game.

The game was an important contest between two likely playoff teams from the north area and both showed some strength although Winslow was clearly the dominant team on Friday.

The Bulldogs got an important win for the second straight week and improved their chances of getting a good playoff seed and a possible home game, although they have an extremely tough final regular season game against the undefeated and top ranked Blue Ridge Yellowjackets at Pinetop.

Winslow drove 68 yards on their first possession and scored on a 32-yard run by Henry Montiel. LuKas Jordan booted the conversion for a 7-0 Winslow lead.

Kelly Wood broke away for a 51-yard scoring run on Winslow's next possession. Jordan again converted the extra point to increase the Bulldog lead to 14-0.

Monument Valley found their way onto the scoreboard on a nine-yard pass from Redmond Delmar to Tez Molalla. The conversion by Delmar cut the Winslow lead to 14-7.

Next, C. J. Chacon intercepted a Monument Valley pass to set up Winslow's next score, returning the ball to the Mustang 31 yard line. James Martinez ran five yards for the score and Jordan converted for a 21-7 Winslow lead at the end of the first quarter.

Martinez passed 54 yards to Montiel early in the second quarter, increasing the Winslow lead to 28-7 after Jordan's conversion.

After Winslow recovered a Mustang fumble, Wood ran 14 yards to score and Jordan booted the conversion for a 35-7 Bulldog lead.

Monument Valley responded driving 59 yards to score on a nine-yard pass from Delmar to Keony Mitchell. Delmar converted to cut the Winslow lead to 35-14.

Wood put together a 56-yard scoring run negated by a holding penalty but then completed the drive with a four-yard run for the score. Jordan converted to give the Bulldogs a 42-14 lead at the intermission.

Trey Hardy blocked a Mustang punt to set up a 31-yard field goal by Jordan that increased Winslow's lead to 45-14 early in the third quarter.

Continuing to dominate the game, an interception and a 33-yard return by Akkeem Foster increased the Winslow lead to 52-14 after Jordan's conversion.

Delmar passed nine yards to Gregory Williams for a Monument Valley touchdown. The conversion was missed and Winslow led 52-20.

The Bulldogs got an insurance touchdown in the closing seconds of the third quarter on an eight-yard run by Sam Setalla. Jordan converted to increase the Winslow lead to a commanding 59-20 entering the final period.

After Winslow recovered a fumble on the kick off, Jordan booted a 30-yard field goal to increase the Winslow lead to 62-20.

Delmar passed 11 yards to Keone Mitchell for a Monument Valley touchdown, and then passed to Kervin Tom for a two point conversion that cut Winslow's lead to 62-28. The Bulldogs were able to run out the clock and take the victory.

The Bulldogs face the Blue Ridge Yellowjackets in Pinetop for the last game of the regular season. Blue Ridge remained undefeated after an impressive 24-14 win last week over the Show Low Cougars in a match of undefeated teams at the top of division rankings.

Monument Valley has an important contest against the Window Rock Fighting Scouts at Window Rock on Friday. The Mustangs are a likely playoff team and could well have a home game in the first round. Window Rock was 4-4 going into last week's game against the Hopi Bruins at Polacca.