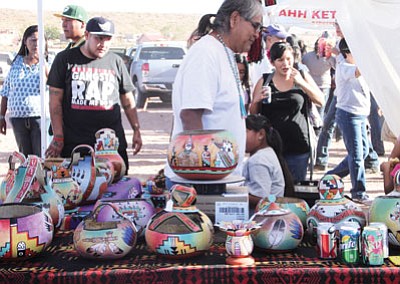 TUBA CITY, Ariz. - The 2012 Western Navajo Fair in Tuba City hosted thousands of visitors over the past weekend. This year's theme, "Courage, Sacrifice and Duty," was felt throughout the weekend with many fair events honoring and recognizing all veterans and military personnel currently serving in United States armed forces.

Visitors from all across the country were able to buy authentic art from vendors from Hopi, Navajo and various other tribes across the southwest.

Visitors and locals alike came to enjoy the event at the Tuba City fairgrounds and also at the Hopi village of Upper Moencopi. The village hosted its annual "Tuuvi " event next to the Hopi Tribe's Legacy Inn hotel where vendors were spread out all over Tuba City main highway roadsides.

Native foods like fresh, grilled mutton sandwiches, hot tamales and corn stew along with carnival treats like turkey legs or cotton candy were served up alongside sights for the eyes like traditional Hopi social dancing, an all Native rodeo, a parade on Saturday morning, carnival rides, a massive powwow and even some newer music concert events featuring Native musicians from New Mexico and Phoenix for free at the fairgrounds Oct. 20.

Carnival rides were extremely popular. Grandparents took their grandchildren for a special night out, teenagers looked to see who could stand the most outrageous, head-dizzying ride and children played carnival games hoping to win a special prize.

The annual Tuba City Western Fair turned out to be a wholesome family fun weekend.