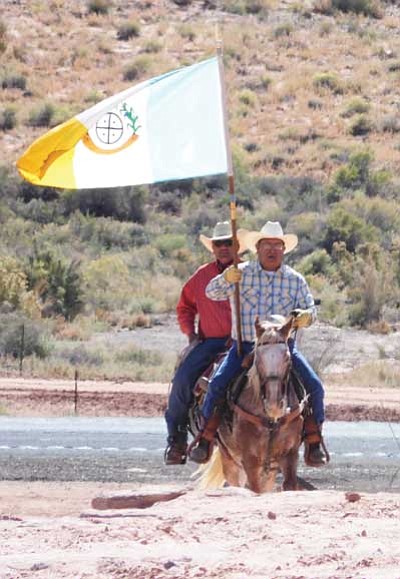 TUBA CITY, Ariz. - To kick start the annual Western Navajo Fair in Tuba City, a group of Navajos and Hopis numbering almost 75 rode on horseback from Kayenta, Ariz. Oct. 17 to the Tuba City fairgrounds Oct. 19. The trail ride honored all veterans and service members currently serving in the military.

The riders arrived on time, with numerous "chase" vehicles and families around noon on Friday, dust and colors flying.

The Hopi and Navajo tribal flags, the American flag and the special KIA-MIA flag were flying high in the morning sunshine to open the special prayer ceremony at the fair's "Yeibichei" ceremony which also featured a special blessing sand painting that was completed by the time the riders arrived in Tuba City.

The "Trail Riders" posted colors for the fair rodeo that was slated to open at 7 p.m. that evening and participated in the afternoon "traditional" meal and blessing events meant to honor all veterans, alive and deceased and those killed or missing in action.

Four special riders were given the duty of carrying the Hopi and Navajo tribal flags, American flag and MIA-KIA flag.