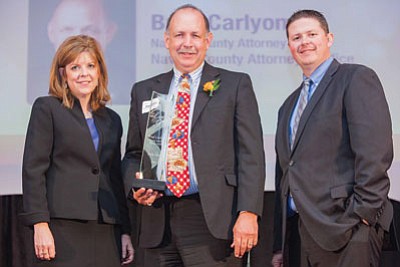 There are 16 categories of Public Policy Leadership annually awarded. In selecting Carlyon, the selection committee emphasized that he "has a vision for Navajo County and has been very proactive in his determination to combat crime and maintain safe communities."

The award highlighted the following as examples of Carlyon's proactive approach:

• Taking the lead in establishing Family Advocacy Centers (FAC) in Show Low and Holbrook. The FAC provides a convenient, non-threatening environment where victims of child abuse and neglect and adult sexual assault and their families can meet with medical examiners, mental health specialists, victim advocates, representatives of state agencies, law enforcement representatives and prosecutors. The FAC is a public-private partnership. In Show Low, Navajo County lets FAC use extra office space it has available and in Holbrook, North Country Health Care provides the physical space. Local community organizations donated funds and items to outfit the centers and clothes for the victims. Social service providers and the faith based community assist with providing counseling and other services to help the victim and their family on the road to recovery.

• Hosting annual Victims' Rights Symposiums to bring together nationally known experts in the field of crime victims' rights, The Symposium has grown each year to where nearly 300 local providers of victims' services, social services professionals, educators, law enforcement and professionals and citizens with an interest in victims' rights attend each year.

• Greatly increased Navajo County's access to federal funding and resources for fighting drugs and educating children about the dangers of drug use by working tirelessly with the Navajo County Sheriff to have Navajo County designated as a High Intensity Drug Trafficking Area (HIDTA). This was the first time in over a decade that any county in the U.S. was named a HIDTA county. HIDTA has helped develop strong federal and state-wide law enforcement partnerships with Navajo County that has led to a dramatic increase in drugs taken off the streets and seized in Navajo County.

• Establishing the Navajo County Domestic Violence Court, an intensive diversion program for first-time domestic violence offenders similar to the Drug Court that Navajo County has operated successfully for several years. The program has been successful in nipping domestic violence in the bud and preventing it from becoming a repetitive cycle that destroys families and relationships.

• Holding a series of meetings for churches, other faith-based groups and community leaders and organizations to brainstorm ways to become more involved in the fight against substance. The meetings were conceived by Carlyon and the Navajo County Drug Project to explore creative alternatives to the traditional "prosecution model" of battling substance abuse.

• Carlyon has insured that homicides and other major crimes are investigated in a timely, thorough and professional manner by creating a Homicide Investigation Task Force comprising the most experienced detectives from every law enforcement agency in the county and an experienced prosecutor.

"Brad has accomplished an astounding amount in just his term in office," Lamb told the awards ceremony attendees. "We are proud to recognize his achievements with this award."