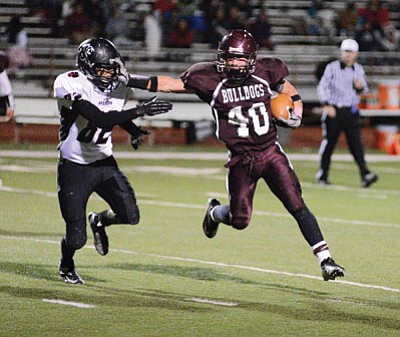 WINSLOW, Ariz. - The Winslow Bulldogs took a huge step towards the divisional playoffs with a surprisingly large margin victory over the Coconino Panthers in Winslow Oct. 12.

The teams entered the game with winning records and vying for playoff berths. Winslow improved its record to 5-3 and made itself a serious contender for a playoff spot and a possible home game in the first round. Coconino fell to 5-3 but still has hopes of securing a playoff berth.

The Bulldogs scored on their first play from scrimmage when Kelly Wood raced 78-yards to the end zone. Lucas Jordan booted the conversion for an early 7-0 lead. Winslow had an apparent touchdown negated by a penalty erasing a 60-yard punt return by Henry Montiel.

Montiel did score early in the second quarter on a 30-yard run and Jordan converted for a 14-0 Winslow lead.

The Bulldogs regained the lead on a 10-yard run by James Martinez with just over a minute left in the half. Jordan's conversion gave Winslow a 21-14 lead at the intermission.

Coconino drove deep late in the third quarter but Sorden missed a 27-yard field goal attempt. Winslow then drove 80 yards and Martinez passed 36 yards to Demetrius Gamez to give the Bulldogs a 28-14 lead after Jordan's conversion going into the final period.

The Bulldogs will host the Monument Valley Mustangs on Friday in another game with important playoff implications. The Mustangs have had a very successful season and are a likely playoff team. The Mustangs defeated the Ganado Hornets 47-8 at Kayenta to remain undefeated at 8-0. They have not

played as tough a schedule as the Bulldogs but still look like a dangerous opponent. Winslow will finish its regular season at Pinetop Oct. 26 against the top ranked Blue Ridge Yellowjackets. Blue Ridge stayed undefeated with an easy 55-0 win over Apache Junction at Apache Junction.

Coconino has an important game next week as well when the Panthers meet the Flagstaff Eagles at Northern Arizona University for the city championship and a possible playoff berth. Flagstaff defeated Glendale 38-0 at Glendale to improve to 6-2.