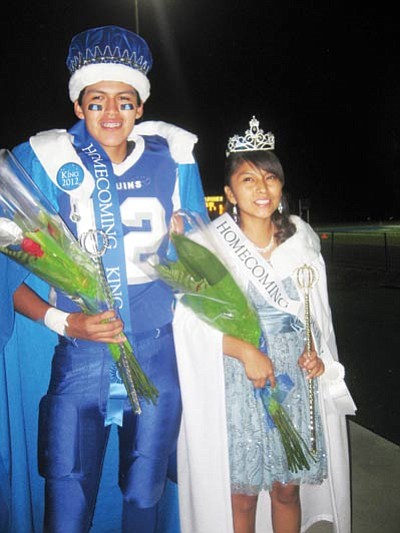 POLACCA, Ariz. - Homecoming was exciting for Hopi High from the selection of the homecoming king and queen to the victorious Bruin football game where Hopi edged Greyhills 20-14 going down to the last play of the game.

Joshevama said winning the homecoming king crown was great because there was a lot of energy at the game. He called the homecoming week "awesome and the best yet." He was happy with the homecoming parade since he had his own float and he liked the hall decorations.

Joshevama, who maintains a B average, plans to major in sports medicine at Glendale Community College. He also plays basketball and baseball. He is active with National Honor Society and the senior class.

He is the son of Cheryl Tootsie and Elgean Joshevama Jr. They reside in Kykotsmovi.

Navywaima said she was happy and excited to be named homecoming queen because she had a chance to be with her friends and have fun.

"I liked the parade because it was fun throwing candy," she said.

Navywaima, who maintains an A/B average, plans to major in physical therapy at Paradise Valley Community College. She is active in the senior class.

She is the daughter of Valerie Thomas Lomayestewa and Lee Lomayaktewa. They reside in Old Oraibi.

Hopi High won the football game on a one-yard TD plunge by Blake Sekaquaptewa with 2.2 seconds to go in the game.

The game was a defensive battle until the final four minutes. Hopi High went ahead 14-6 with 3:23 remaining only to see Greyhills come storming back to tie it at 14-14 with 39.4 seconds left in the game to set up the late game heroics by Sekaquaptewa.

Greyhills scored first in the second quarter. Chad Blackrock scored on a 14 yard run. A run failed on the conversion attempt, but the Knights led 6-0 with 8:16 to go until halftime.

Hopi responded by marching 69 yards in 12 plays for a TD. The key plays in the drive included a 12-yard run by Sekaquaptewa and a 20 yard run by Michael Naha. The TD came on a scoring strike from Joshevama to Clayton Howard. Sekaquaptewa ran in the conversion points as the Bruins led 8-6 with 3:49 left in the second stanza.

Neither team scored for the rest of the second quarter, all of third period and most of the fourth quarter. Both teams were hampered by penalties.

Hopi High played ball control during most of the fourth period. The Bruins used more than eight minutes as they marched 74 yards in 16 plays. The key plays in the drive were a 17-yard pass from Joshevama to Sekaquaptewa and a 13 yard run by Sekaquaptewa. The TD came on an 11-yard pass from Joshevama to Howard. A run failed on the conversion attempt, but Hopi led 14-6.

Three passing plays and two major penalties put Greyhills in scoring position. The Knights TD came on a 10 yard scoring pass from Sergio Oliver to Darron Dugi. Oliver then connected with Blackrock on a pass play for the conversion points to knot the score at 14-14 with 39.4 seconds left.

Hopi kicked off and Greyhills fell on the ball as time expired. The fireworks went off as Hopi had its homecoming victory.