Out and about - Green Mountain a plethora of flowers, butterflies and scenic mountain views 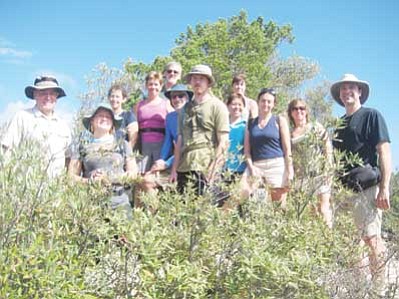 A group of Sierra Club hikers at the top of Guthrie Mountain. <i>Stan Bindell/NHO</i>

GREEN MOUNTAIN, TUCSON, Ariz. - Green Mountain is aptly named because the trees and plants make it plush green. It was also called one of the top ten summer hikes by Arizona Highways.

Aside from the greenery, Green Mountain offers a plethora of flowers, butterflies, scenic mountain views and puts hikers right up in the beautiful clouds.

Red Columbine, also known as Little Lantern, is one of the unique flowers found along this trail. These flowers attract many butterflies such as the Duskywing. Towering trees offer shade most of the way.

Lizards, birds, bright orange mushrooms and ferns are also found along the trail.

The June edition of Arizona Highways offered Green Mountain as one of its top ten summer hikes as it highlights the lush green forest due to the ponderosa pines, Douglas firs, evergreens, oaks, manzanitas, Arizona cypress, yuccas and beargrass.

The Green Mountain hike is 7.8 miles roundtrip with an elevation change from 6,000 to 7,300 feet. It can also be done in either direction for those willing to use a car shuttle so they can go only one way. Arizona Highways rates this hike as moderate.

But this hike was just a tad different as Mitch Stevens led a dozen Sierra Club hikers starting on Green Mountain, then climbing to the top of Guthrie Mountain with great views along the way of the Santa Catalina Mountain range. We did a car shuttle and kept the hiking to just a tad more than six miles.

Stevens said he likes the Green Mountain Trail because it shows how an area can recover from fire. There were large fires here with the Bullock Fire in 2002 and the Aspen Fire in 2003.

"The forest remains beautiful," Stevens said. "Also, the views of the San Pedro Valley and neighboring Sky Islands from Mount Guthrie are spectacular."

This hike offered a great deal of panoramic views of the surrounding mountain ranges. There was no water along the trail except for a small part of Bear Creek on the way out.

Climbing to the top of Guthrie Mountain meant scurrying up some rocks for the final upward leg of the hike. It just made the lunch stop and the view from the top that much better.

Another plus is meeting a fellow journalist Merrill Collett, a retired reporter from the San Francisco Chronicle.

Part of the fun of this hike is the scenic drive up Mount Lemmon. The general store at the top burned down during the big fire only to rebuild afterward. Photos in the store show the store before, during and after the fire.

There are no vehicle requirements. Dogs are allowed, but need to be leashed. There are several restroom areas on the road up Mount Lemmon. There is also a visitor's center toward the top. For more information, contact the Santa Catalina Ranger District at (520) 749-8700 or www.fs.usda.gov/coronado.

Directions - From Tanque Verde Road in Tucson, drive 4.2 miles on Catalina Highway to the Forest Service boundary and continue 17.5 miles to the San Pedro Vista.