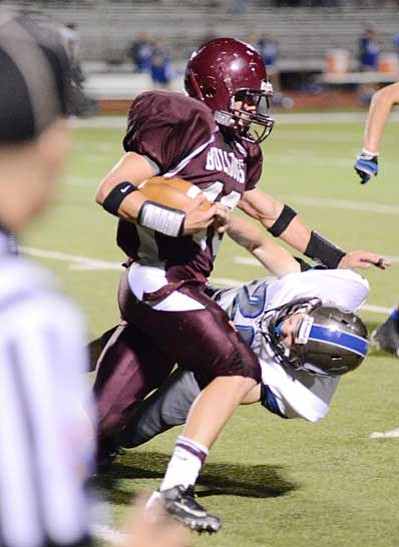 WINSLOW, Ariz. - The Snowflake Lobos defeated the Winslow Bulldogs 43-17 in Winslow on Sept. 28. The win improved Snowflake's record to 4-2 for the season and dropped Winslow's to that same 4-2 mark.

The win was important for the Lobos who have losses to the top two rated teams in their division, Blue Ridge and Show Low. Winslow still has both of those teams to play, playing at Show Low this Friday and Blue Ridge in Winslow in the last game of the regular season.

The game was close in the first half and for most of the third quarter. Snowflake pulled away in the last half of the final quarter.

The Lobos scored on their first possession after a long punt return set them up at the Winslow 25 yard line. Chase Walden hit Dough Brimhall with a 25-yard pass with 9:49 left in the first quarter. Walden ran for a two-point conversion after Winslow was penalized to take an 8-0 lead.

Both teams failed to convert on fourth and short.Winslow lost the ball on downs twice around the Snowflake 40 yard line and the Lobos turned it over once at the Winslow 16. The Lobos led 8-0 at the end of the first period.

Rick Shumway ran 27 yards on a reverse play for Snowflake's second touchdown with 10:15 left to play in the half. Kirt Solomon booted the conversion for a 15-0 Lobo lead.

Winslow got on the scoreboard with a 32 yard field goal by Lucas Jordan that cut the Snowflake lead to 15-3 with 2:29 left in the half. The Bulldogs converted a fourth and two to keep that scoring drive alive.

The Bulldogs threatened in the closing seconds of the half and were inside the Snowflake 15 yard line when the half ended with Snowflake still leading 15-3.

Chase Walden ran six yards to complete a 75-yard Snowflake drive to start the third quarter and give the Lobos a 22-3 lead with 6:27 left in the period after Solomon converted.

Walden hit Braccin Tanner with a 74-yard pass with 2:37 left in the quarter. Solomon's conversion gave the Lobos a 29-3 lead.

Winslow's Kelly Wood scored on a 17 yard run on the final play of the third quarter. Jordan converted to cut the Snowflake lead to 29-10 entering the final period.

Wood scored again on a five yard run with 8:56 left in the game. Jordan converted to cut the Snowflake lead to 29-17.

A long kickoff return by Lehi Caldwell to the Winslow 23 yard line set up the next Lobo score. Walden passed 10 yards to Tanner and Solomon converted for a 36-17 Snowflake lead with 6:55 left to play.

Walden passed 41 yards to Rick Shumway for the final score of the game with just 1:53 left to play. Solomon's conversion made the final score 43-17 in favor of the Lobos.