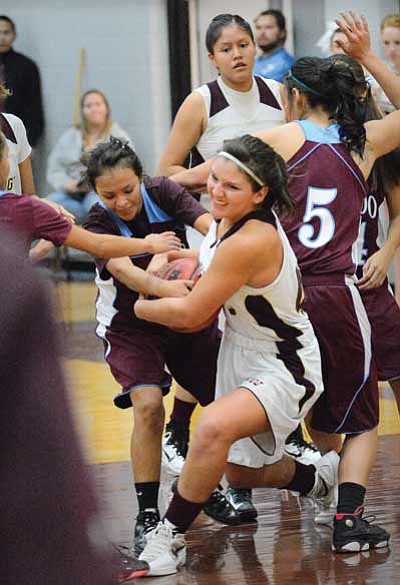 Shandiin Armao fights for the ball on the way to the Winslow Bulldogs’ 58-30 win against Ganado Nov. 20. Photo/Todd Roth

WINSLOW, Ariz. - The Winslow Bulldogs and Lady Bulldogs both opened their 2012-13 seasons with home court wins, one almost a blowout and the other coming down to the wire.

The Lady Bulldogs chewed up the Ganado Lady Hornets 58-30 in Winslow on Nov. 20, a game in which the fourth quarter was played with a running clock due to the lopsided score.

The boys' game was a nail-biter, with questionable calls and a technical foul playing huge roles in the outcome.

The Winslow Lady Bulldogs built a double-digit 19-5 first quarter lead and were never threatened. The lead was a commanding 38-12 at the half and 54-19 after three quarters of play.

Mattea Begaii led all scorers with 14 points for the Lady Bulldogs, followed by Marcella Joe with 13 points. Shandiin Armao was also in double figures for Winslow with 15 points. Nicole Curley led Ganado with eight points.

The Winslow Lady Bulldogs hosted the Hopi Lady Bruins on Tuesday and will travel to Polacca, Ariz. on Dec. 4 for a rematch with the Lady Bruins.

In the boys' game, the Winslow Bulldogs edged out the Williams Vikings 63-59 Nov. 20.

The Bulldogs started strong and had a 21-13 lead after the first period of play. The margin remained at eight points at the half with Winslow leading 35-27. Williams cut the lead to 49-43 by the end of the third quarter and actually took the lead in the closing minutes of the game.

There were several key plays in the closing minutes of play. Williams took a one-point lead on what Winslow coaches and fans thought was a shot that should not have counted. A Williams player released and made a shot that appeared to be well after a foul had been called.

Fortunately for the Bulldogs, referees called a personal foul and a technical foul on Williams. Winslow made all four free throws and got the ball out of bounds.

Michael Goldtooth was the only Bulldog in double figures with 17 points. Winslow had 10 players score with only five Vikings in the scoring column. Lukas Shirley and Stevin Nelson each scored eight points for the Bulldogs.

The Bulldogs hosted the Hopi Bruins on Tuesday. They host the Winslow Shootout Tournament in Winslow this Thursday, Friday and Saturday.